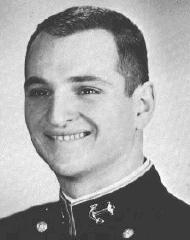 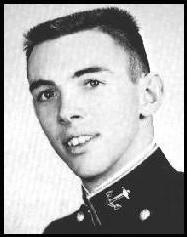 Birney came to the Academy after two years at the University of Vermont. He managed to miss almost all the Parades by being on the sailing team. A Green Mountain Boy, he organized the elite "Bridge Club" and was known on occasion to be found contemplating the problems of the world in his room. While his classmates were busy flying at Pensacola, Birney found time to learn the art of driving a line tractor. On various occasions he was known to give an impromptu lecture in the absence of an instructor. Birney's favorite pastime next to smoking his pipe is listening to Glenn Miller records which drove his roommates crazy. Gus, as his friends call him, always managed to return from leave about twenty pounds heavier than when he left, and with this particular attribute he intends to enjoy life. 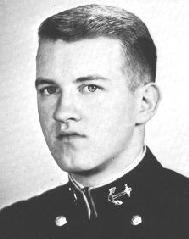 Jim ventured forth to USNA, golf clubs over his shoulder, from the Green Mountains of Barre, Vermont. Taking Plebe year in stride, if it is possible, Jimbo could always be found pursuing a new activity. This boundless energy still largely untapped, he continued to cram the day to the limit, whether it be the golf links, academics, Drum and Bugle Corps, Chess Club, or the weekend brick. Upon leaving the friendly confines of USNA for that annual cruise or occasional trip, Jim was famous for his unusual escapades, and in the four years with Navy has cut a wide swath along the Atlantic and Gulf coasts. From Montreal to Bermuda, or Bermuda to New Orleans, our classmate has left us many sparkling memories of liberty well spent. Regardless of the path chosen from USNA, Jim will provide those around him with a true friend.