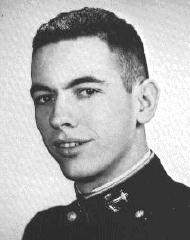 Born and raised in Philadelphia, Joe entered the Academy via the fleet where he spent two of his most enjoyable years. Always one for having a good time, yet being ready to pitch in when there's work to be done, he is especially well liked by his many friends and acquaintances. An ardent member of the sailing squadron and battalion wrestling team, he has also found time to devote to his duties as Log and Splinter representative. Joe hopes to wear the golden wings of Naval Aviation; there is no doubt that Joe will be a welcome and appreciated addition to our Navy.

Roger came to the Naval Academy from the water wonderland state of Michigan. During his stay at the Academy he devoted most of his time to catching up on all the sleep he missed during leave. However he did find time to participate in intramural sports; such as football, soccer, and fieldball. If you caught him awake at other times, he would invariably be spinning sea stories while listening to his favorite records. Although "Rog" was not noted for his academic prowess, through hard work he was able to achieve his big goal at the end of his four year stay at USNA, that of becoming a member of the Alumni Association. 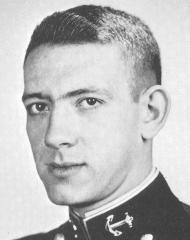 Because of his strikingly ready humor and friendly manner, Dave was christened with the apt nickname, "Snuffy", right from the beginning of plebe year. Hailing from Denton, Texas, there remained no doubt in our minds as to "Snuff's" home state. Navy offered him his second plebe year, his first received at Texas A&M with a degree of justified pride. With his personality and working ways he proved a fine member of the reception committee, BAC, and <I>Lucky Bag</I> Advertising staff. He worked hard at academics, but seldom let them interfere with a good book. "Snuff" finally convinced the profs that German could be spoken with a Texas accent. His athletic service was rendered to battalion boxing and company 150-lb. football and softball. With his sights set on Navy Air, "Snuff" will become a fine officer in any man's squadron.