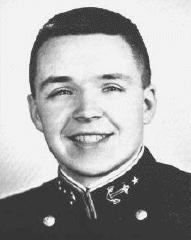 Harry, known as "Chub" by most of his classmates, hails from the small town of Pitman, New Jersey. Chub came directly from high school and soon proved to be one of the top men academically in his class, acquiring stars by the end of his youngster year. Besides being somewhat of a slash, Chub was also a good athlete. He contributed his service to the championship battalion team two years in a row. His talent later gained him a berth on the 150 pound football team. Chub's quiet, friendly, and moderately serious manner made him a hit with his classmates. His many qualities assure him of being a very fine Naval officer. 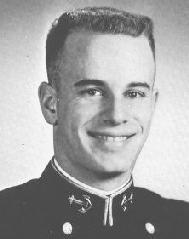 After a year at Severn Prep, Ken came to USNA to launch his naval career, and a running battle against the "skinny" department. He could usually be found expounding the glories of Seattle, Washington, to a classmate and, being a lover of the first degree, weekends frequently saw him entertaining his favorite girl. Another of Ken's interests was the outdoors where he spent most of his vacations hunting or fishing. He excelled in various sports and was a tiger on the lacrosse field. Ken's likable ways punctuated by his philosophies and remarks that broke up the party will long be remembered by his classmates. He was probably the only plebe to go through plebe year without saying, "I'll find out, sir." Right or wrong, he always had an answer. With his ability and drive a future of success is sure to follow. 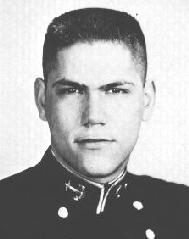 Ron came to the Academy from the teeming metropolis of Pitman, New Jersey, and is proud of it. A natural athlete with a penetrating will-to-win, he has always been a leader in intramural sports, be it football, basketball, cross-country, or pool. In addition, Ron is a sports afficionado in every sense of the word, always more than willing to spend his liberty time watching a good solid sports contest and able to recite without any hesitation any sports fact. "Squee" was always way ahead of the game in academics, having little trouble remaining a star man and apparently deriving a great deal of pleasure cramming every available space in his academic program with overload courses. With his carefree nature and his easily provoked laugh, this yankee lad should prove a most valuable asset to the Navy and to the country in whatever endeavors he undertakes.