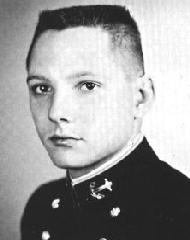 Mike comes to us from Yonkers, New York. He received his secondary education at Cardinal Hayes High School, Bronx, New York, where he was editor of his school newspaper. At the Academy, Mike has participated enthusiastically in intramural athletics. After concentrating on lightweight crew for his first two years, he turned his efforts to soccer, 150 pound football, and softball. Mike is addicted to Johnny Mathis and Frank Sinatra, famous for plebe tea fights, and restricted in his dating. Mike's career aspirations range from the lowest to the highest. Although the submarine service has long occupied his interest, Aviation Summer brought wings into contention with dolphins. 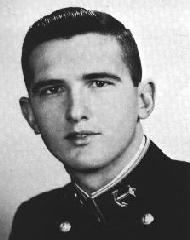 Being the son of a retired marine, Joe was already accustomed to military life. Consequently,he did not have much trouble in getting into the swing of Naval Academy life. Joe always put a great deal of effort into academics, because he felt that a good education was the most important prerequisite of a good Naval Officer. He was a faithful member of the Reception Committee, and a well-established critic of the Saturday night flick. Joe had the knack of turning on his Southern gentleman charm, so that he was rarely lacking feminine companionship. When not sleeping, dragging, or going to the flick, he did manage to squeeze a few company and battalion sports into his schedule. Joe's relaxed outlook will certainly insure him success in his service career. 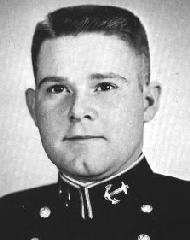 Gary came to us from the hills of West Virginia via the Navy where he was an aviation electrician. While at the Academy, he played battalion football until he had some bad luck with his arm. Since then he has spent some time in the hospital. Gary is one of the few midshipmen who has majored in dragging his fiancee the entire time he was here. He became engaged just prior to his entrance to the Academy. Gary like many of his classmates has fought through that almost impenetrable subject, science. He carries the rather obvious nickname of "Red" due to his tint of hair. He is easy-going, even though the fourth class doesn't think so, and a great guy to know. Gary always has a cheerful word and a ready come-back when necessary. Gary is one of those persons who wants to defy the laws of gravity and go Navy Air. The Fleet Air Wing will get a willing worker and ready wit from Gary.