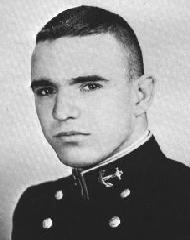 Bill is more affectionately known as "Punchy" from his inimitable bounce and verve. The bounce carried him well both in fencing and in managing fencing and lacrosse. So well that he has a reputation as a perpetual manager. The verve kept him busy with the Foreign Relations Club and as a guiding light in the Naval Academy Foreign Affairs Conference, which he helped to found. Bill came to the Naval Academy straight out of the Boy Scouts of Pomona Catholic High School. Pomona is a suburb of Los Angeles, whose virtues he never ceases to extol. A diligent student with above average grades, Punchy, instead of wasting his week-ends in a drag house, put them to good use reporting on sporting events for the Log. There was a precedent of some sort set when Bill graduated. He is one of the few people in the country holding a Bachelor of Science degree with his major in social studies. 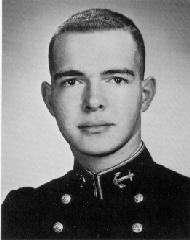 Mike came to the Academy upon graduation from high school. While there he pursued music as his main extra-curricular interest, being the drum major of the marching band. He brought with him this interest in music and has participated in Musical Clubs presentations as well as the Midshipman Concert Band. Mike has developed an interest in sailing and has been a member of the ocean sailing squadron. He participated in various intramural sports on the company level, such as cross-country and soccer. Mike had a better-than-average academic career here on the banks of the Severn. He particularly enjoys foreign languages, in which he stood near the top of his class, and professional subjects. Concerning his plans for the future, he is primarily interested in Naval Aviation, and is planning to make his career in the naval service. 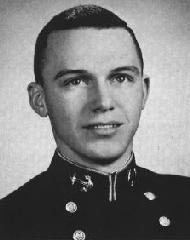 Jim Shull came to the Academy from Elizabethton, Tennesee. Before coming to the Academy, he first spent a year at Carson-Newman College in Tennessee and was on the Dean's List. Once at the Academy, Jim applied himself to everything with a diligence and thoroughness that was to be his hallmark. He engaged in many activities while at the Academy, chief among them being the Naval Academy Christian Association and the Officer's Christian Union. He also devoted much of his time and services to his church in town. A big asset to the company sports squads, Jim was an active and hard working participant during his stay. Jim enjoyed his cruise following Plebe year and plans to go Navy line. Navy's investment will be well rewarded when he joins the fleet.