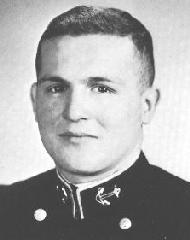 Lou came to the Academy from Holy Trinity High School in Trinidad, Colorado. He brought with him a talent with the trumpet, athletic ability, and a friendly smile. The musical talent quickly gained him a position in the Drum and Bugle Corps. The Corps and the choir used up most of his time until second class year. Lou left the D&B Corps to play 150 pound football and won a spot on the varsity. He has never lost his smile but it hides a great competitive spirit and desire to excel. When not engaged in a scheduled activity, Lou is often found listening to good music or talking to other men from Colorado trying to find a free hop home for his next leave. Such a versatile and persoable fellow will be a real asset to the military service. 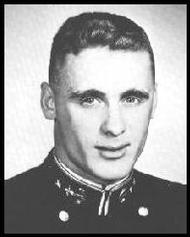 Jim Small, though having lived in Iowa, Tennesee, California and New York, claims Rochester, New York, as his hometown, and just about every leave period would find him on his way to Rochester. Joining the Navy right after high school and desiring to further himself, he went to F.T. school and made the grade before coming to the Academy. Jim was an active participant in battalion and company sports, wrestling and company football being his best fields. One of his main interests was cars, and he was always amazing his classmates with his keen ear for identifying the make of an engine by sound alone. This, coupled with a cautious driving attitude, made him quite a wise driver. Another interest of Jim's was electronics, which helped him weather the second class science course without much mishap. Jim is a credit to the Naval Academy and will be a credit to the military services. We should hear a lot about Jim in the years to come. 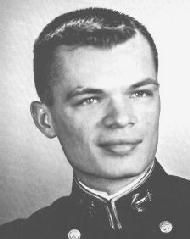 After a year of pre-engineering in the Hawkeye State, Lloyd decided that he would be the first in a long line of sea-faring Smiths. With his wide variety of experiences, a strong liking for politics, and many good-byes, Smitty made his way to the Severn where the determination to improve was certainly his most outstanding characteristic. Like the greater majority of us, Lloyd's personality and character have their weak points, but unlike that same majority, he has made a continual effort to strengthen thd weak points and to further develop the already strong points. He has not only attempted to improve himself in the eyes of his classmates, the Brigade of Midshipmen, and his (sigh) feminine companions, but more he has forced himself to show continuous improvement to himself. The Log's Circulation Department will verify that he is a hard worker, and he will accomplish much more than men of equal capabilities, who have but average drive and determination.