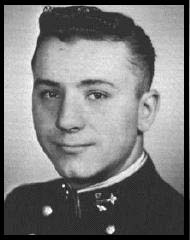 Al Taylor, known to his classmates affectionately as "A.B.", came to the Academy from the Big City. Having attended Brooklyn Technical High School, he was well prepared for an education in the engineering field which he pursued at Brooklyn College, but his love for the water drew him to the Naval Academy after a year. A.B. was a mainstay on the Battalion handball teams as as well as bolstering the company softball and cross-country teams to victory more than once. Another great interest of his was swimming, and most of his free time he devoted to this particular sport. A.B. will be long remembered for his extensive collection of 45 RPM records and a fantastic knowledge of the popular music field. Many times these records brought entertainment into the lives of his roommates. A.B.'s friendly personality has won him many friends, and his winning way with people will serve him well in whatever field he may choose. We are looking forward to seeing him progress in the future. 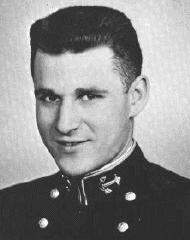 Ray considers the variety state of California his home. After graduating from Lodi Union High School, he found himself lost in the confines of the Naval Academy for four long years. Being a typical Californian, Ray was always ready to match his state against any other in the Union. His hobbies were many and varied, among them were included sports cars, sailing, athletics, and the happiness of pursuit. However his favorite hobby was running Plebes. Ray has been active in the intramural sports program, being on the Battalion boxing and track squads. Everyone marveled, though, when he made weight for the 127# weight class for Brigade boxing year after year. To avoid the rolling seas, Ray is now aiming to become a Naval Aviator. We wish him many years of happiness and many safe landings. We know that he will prove to be a credit to the naval service in the future. 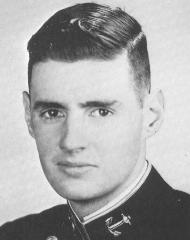 Paul's life history sounds like a travelogue. He was born in Detroit, Michigan, attended high school at Bronxville, New York, and Lawrenceville, New Jersey, spent a year at Cornell University in Ithaca, New York, and his present home is in Shaker Heights, Ohio. On the other hand he doesn't move at all on the soccer field - that's a goalie's privilege! With winter Paul shifted to the intramural squash league. In his spare time he pounded a typewriter for the Log and Splinter, welcomed incoming athletes as a member of the Reception Committee, or was likely to be engrossed in a stack of records. Someday he may learn to play the banjo, but we can't be so optimistic about his singing. Paul is a student pilot, but admits that he'd like to confine his flying to weekends and stationary runways. Upon graduation Paul plans to stay on the sea with submarines or Navy line.