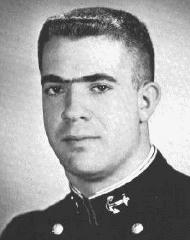 Upon graduation from Pitman High School Doug entered USNA as an aspiring gridiron candidate. But track and field events soon captured his attention and plebe year saw Doug break the plebe record in the javelin. With added weight and strength, he switched to the thirty-five pound weight and hammer. Early indication showed that more records were soon to topple. As a youngster, he won his N-star against Army. Doug's drive and determination that second-best is never good enough have kept him on top in most of his efforts. Academics never gave Doug much trouble, which afforded him enough spare time on weekends to spend dragging a beauty from here or there. Always ready for a good time Doug was well-known and liked by his classmates. His ability to realize a goal and strive for success will surely lead to a future of prosperity. 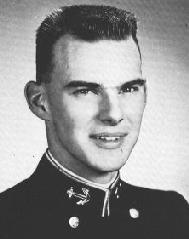 Bob is best characterized by his friendly smile and easy going manner. He has been a mainstay on the volleyball and crew teams, using his long frame (6'3") to great advantage. As far as academics are concerned, Bob's forte is in the Foreign Language Department; he speaks fluent French and is Vice-President of the French Club. Coming to the Academy was the fulfillment of a long cherished ambition for Bob, who has wanted to go to sea ever since he was old enough to know what a ship looks like. During his four years here he has earned the respect and sincere friendship of all those who have known him. He will be a real credit to himself and to whichever branch of the service he chooses. 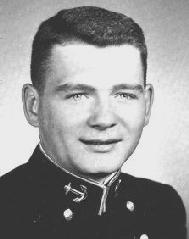 From the sandy shores of Lake Michigan came George, whose love of the sea stemmed from many years of sailing and hydroplane driving on the lake. His easygoing manner and his sharp sense of humor made George well-liked by all. Should the Mid-store ever close, "The Dealer" could always be depended upon to produce almost any item of merchandise. He was active as an ocean racing skipper and was usually found at the helm among the first yawls to finsh any race. George won his first "N" third class year as a member of the pistol team, and always maintained a respectable grade average. His ability to face any task optimistically and to perform it successfully is well-known by all. A hard working fellow, George will always be a welcome addition to any wardroom wherever he goes in the Fleet.