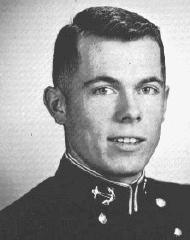 Following a year of study at the California Maritime Academy, Jon decided to leave the West Coast and his first love, the Maritime Service in favor of the Naval Academy. Academics did not present any threat to his Naval Career as indicated by his frequent appearance on the Superintendent's list. Jon's wit and "Blue and Gold" personality have won him many friends during his four years at the United States Naval Academy. Sailing soon caught Jon's interest and he became an integral part of a winning ocean racing crew which participated in the '62 Newport-Bermuda Race. The "Warn" walk is sure to bring back memories as Jon is seen bouncing happily about the future. Jon, a descendant of two generations of submarine builders, is looking forward to conning his boat someday into Mare Island as a member of the silent service. 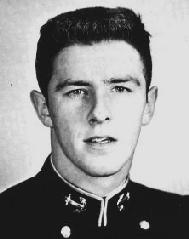 Larry has lived most of his life in Queens, New York, and at Regis High School Larry stood out as a varsity athlete. His enthusiasm for all sports is well known to his classmates, but basketball has remained his great love. Any weekend when he's not dragging and when basketball is in season (nine months of the year for Larry) will find him pounding the backboards. "Lar" is well known also for his vast store of miscellaneous facts. The plebe who could beat him on general knowledge is yet to be found. After a little trouble with Drawing, Larry has stood high in his class and has taken advantage of the overload program to further his talent for foreign languages. The thing which you first notice about him, and which will make Larry stand out all his life, is his love of life. This will take him through the trials of life unscathed. Larry will be a credit to the service, and to the world. 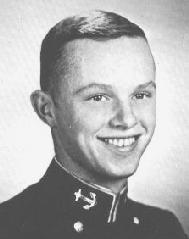 After spending a carefree year at the University of Rhode Island, Pete found plebe year quite different, but he soon adjusted to the military way of life. Since coming to the Academy he hasn't been one to spend all his time with the books. Company and battalion sports plus members of the opposite sex have taken a lot of his free time. His ability to get along with people from the first meeting was an asset he used fully on the Reception Committee. Aviation summer was so interesting to Pete that he wants Navy Air for a career, and with his keen interest in the subject, he is sure to be a success.