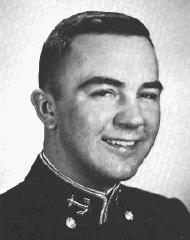 Coming from the banks of the grand Wisconsin to those of the Severn, "the pride of Wausau High" brought with him a background of both merit and distinction. In Academy sports, whether on the gridiron,the basketball court, or the cinder track, Jay exhibited a great deal of skill and the will to win. His role as the "Turkey Bowl" quarterback that cold November morning will long be remembered by his company classmates. Jay's academic achievements were not unimpressive, particularly in his chosen overload, "die deutsche Sprache." Unskilled on the blue trampoline, "Jason" frequently resorted to those infamous late,late,late lights as occasion for extra study and outside reading. Jay's sincere manner and honest ambition will certainly be of invaluable aid to him as a Naval Officer. 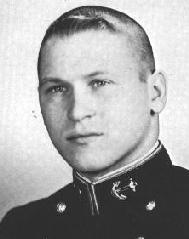 Although hailing from Missoula, Montana, Arizona occupied a favorite spot in Ron's heart. The "Banks of the Wabash" and the harvest moon of his present home, Indiana, run a close second. Ron quickly adapted to the military life and discovered a previously hidden talent for sailing. By the beginning of Third Class year Ron was qualified to command the Naval Academy's twenty ton Luder yawls, and by the end of the same year, he had run one aground. After much experimentation with the many sports offered, Ron chose the flying rings in gymnastics, competed on the Plebe team as number one man, and went on to the varsity. Second Class aviation summer strengthened his desire to win the wings of a Naval Aviator. We are sure that Ron will present the highest ideals of a Naval officer and continue to uphold the traditions of the Service of which he is a part. 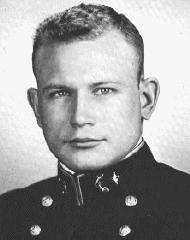 Paul came to the banks of the Severn with a wealth of experience and a mature outlook on life. His opinions and judgment were sought after constantly, and Paul was never too busy to offer a word of advice or encouragement to his many friends. Paul was one of those rare people who seem to do everything well. Chosen as a class representative plebe year, Paul continued his extracurricular activities with an active part in Academy musical activities, the Log and Splinter, and the NACA. Paul's versatility was readily evidenced by his participation in a myriad of battalion and company sports including softball, basketball, football, track, fencing and debate. Academics were never a problem and Paul's name was a regular on the Superintendent's List. Paul will be remembered by those who knew him as a leader, a student, and a friend.