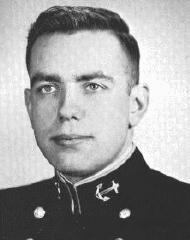 Lanny came here from the land of mint juleps and fast thoroughbreds - Lexington,Kentucky. In his years at USNA he managed to spread his many talents throughoutthe Hallowed Grounds, from the Chapel, where he exhibited his vocal talents as a member of the Antiphonal Choir, to the music platforms as a member of the concert band and on to the field of athletic endeavor on the varsity tennis courts. Within the halls of Mother Bancroft, Lanny contributed to the success of the Brigade Activities Committee. As for musical tastes, he would bend an ear toward any type of melody and rhythm, with a certain favoritism toward "Dixie." He was never one to complain about liberty or leave starting too early or ending too late. Lanny's many activities were allowed by the fact that his studies never by necessity occupied that extra time. His abilities can surely fill more than a casual need of any branch of the service. 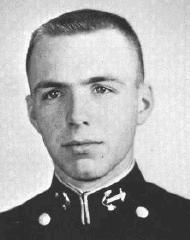 Andy may never become the youngest admiral, but he will long be remembered by the bevy of girls he met and dated during his stay here. Also interested in sailing, graduation, and leave, he gave up sailing youngster year for intramurals and was always a tremendous help to the team. He seemed to spend most of his time trying to beat the steam department or get off the varsity sub-squad. His happiest moments here were when he was talking about flying or after the Redskins or Senators won a game. His knowledge of the area and the places to go in Washington always made him a focal point of attention just before leaves. Andy is sure to be a welcome addition to whichever branch of the service he chooses, and he undoubtedly will make as lasting a mark on the service as he has on his classmates. 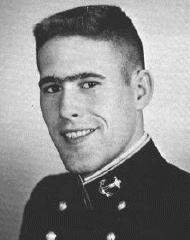 Before coming to the Naval Academy Hank spent two years in the Marine Corps. When on the job, Hank always displayed a strict awareness of duty and responsibility, and during his free time he never allowed the light vein to escape his attention. Demonstrating a definite facility for organization and leadership, Hank participated in the Naval Academy Foreign Affairs Conferences. His effort contributed to a great degree in establishing the Conference as an annual event at the Naval Academy. Hank's talent also enabled the Public Relations Club to become a greater success during his years at the Academy. In the years to come, Hank's potential as an officer in the Naval service will be realized to the fullest extent.