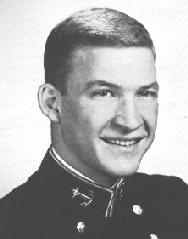 Dave, coming to the Naval Academy from Iowa, brought with him wide travel experience, having lived all over the country. Although he is not a service junior Dave thinks he will like the different locations and variety of tours of duty which the service offers. A very good athlete, Dave's biggest contribution to Navy sports was in wrestling. During other seasons he could be found supporting sixteen wherever a good man was needed. Dave also contributed his many talents to the Trident magazine, putting in long hours to produce a fine publication enjoyed by the entire Brigade. A very pleasant and friendly individual, Dave was popular among his classmates throughout the Brigade as well as being quite popular with the ladies. Reliable and capable, Dave is sure to have a bright future, wherever his path may lead upon his departure from the banks of the Severn. 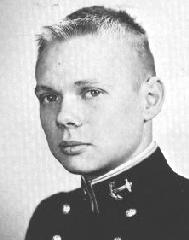 This outgoing, not to say boisterous, son of Ohio stormed into the peaceful harbor of Annapolis after one year at Ohio State University. Here he assumed the position of booster for the Buckeyes in particular and his native state in general. His Academy interests were channeled toward his academic goals, with the result of a high class standing. John also found time for occasional attendance of Spanish Club and Newman Club meetings, and for many of the science seminars. In sports, John's favorite intramural endeavor was touch football, but he gave that up second class year to serve as manager for the varsity wrestling team. His musical tastes leaned to jazz, but he was seldom able to indulge in that pleasure, thanks to a pair of adamant roommates. In his future, John sees a fast sports car and a bachelor officer's career. 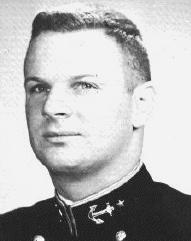 Merrill's interest seems to lie in the field of nuclear power. Forsaking his carefree days of Army ROTC in high school, Merrill came from the Golden State to the hallowed shores of the Severn, ready to tackle anything the Navy could give him. In the daily struggle with the supreme powers of learning, Merrill was usually the victor. His prowess consistently earned him a spot on the Superintendent's List, and his athletic ability put him on the training tables for plebe football, and a starring spot on the intramural teams for four years. Consistently outstanding in everything he does, Merrill has been an asset to the Naval Academy and will continue to be so in whatever field he chooses to enter.