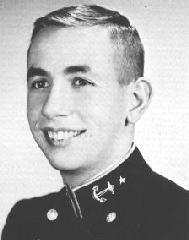 Jack, called "Spider" by his friends, has been very active in Naval Academy activities. As a member of the Catholic Choir, Glee Club, Pistol Team, and a familiar figure around Hubbard Hall, Spider put in many hours of his spare time for USNA. Even with these other interests Jack maintained a very high academic average throughout his four years. As the old saying goes, "all work and no play make Jack a dull boy," so our Jack never let work interfere with having a good time, as evidenced by the sounds coming from his room during study hours, and by his active participation in the innumerable Midshipman parties. As Jack got his highest grades in Bull and his political science major, he would like to study Law in P. G. School after first establishing himself as a submarine officer. 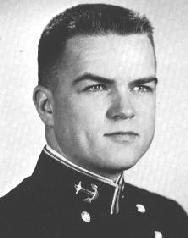 "Duker," a Massachusetts Yankee if there ever was one, came to the Academy straight from high school. Being an avid fan of professional baseball and football, he was always ready to defend his favorite teams with the facts if an argument arose. Always concerned about academics, a definite persistence in his studies merited him good grades. Even though he was a staunch Yankee with a Boston accent, he was never at a loss around the many Southern girls he met at the Academy. His musical talent with the drums also earned him a position on the Academy's Drum and Bugle Corps. With a deep love for the military life, along with personality and quick wit, Jim is sure to be a success in his chosen profession. 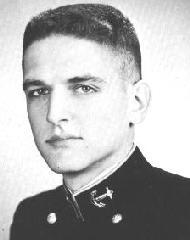 Pat came to the Naval Academy from Clarkson Tech, where a year of Army ROTC served to put him behind the other plebes of '63 as far as being squared away. While this obstacle was being overcome, Pat's plebe year antics made him known to his classmates as "the Vulture." Good grades came to Pat from hard work and persistent effort. His contacts with the opposite sex were on the "trial-and-error" method-each girl received a trial until he made an error to end the relationship. A lover of the outdoors, Pat's greatest interest lies in hunting, on which subject he is a well versed authority. With one eye always looking ahead, Pat will meet success in whatever field he chooses in the future.