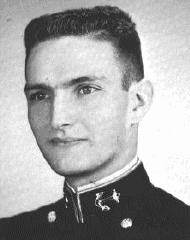 Chuck was one of those people with whom it was always a pleasure to associate, possibly it's because of his "Hoosier" upbringing. A broad smile and a cheery "Hi" is his greeting to all he knows. Even the cold weather failed to dampen his spirit. He was always ready to lend a helping hand to classmates in a bind. Skip, as he was also called, was his high school valedictorian. Consequently, academics were among his many assets but did not receive all his attention. The Naval service has done well to receive such an outstanding officer. As our class comes to the parting of the ways, all will look forward to seeing Chuck again. 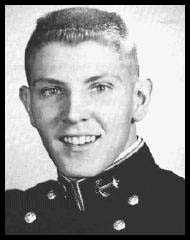 This tall, blond midwesterner with the winning personality was always well liked by his classmates. His genial manner and quick wit never failed to lighten the darkest situation. Before coming to USNA, Friz attended Kemper Military School where he stood number one in science and mathematics. A wizard with numbers, Friz was always willing and often asked to lend a helping hand to his less talented classmates. However Friz's interests were by no means confined to his slide rule and log tables. His boyish grin and easy going manner were big assets in another of his major interests, girls. A fine competitor in athletics, Friz's favorite was bowling. He sported a 200 average during the summers. But Friz's wide range of interests do not end here. He spent a good deal of his spare time educating himself on classical music, and he became quite an authority on the subject. With his well rounded approach to both work and play, Friz is sure to be a success in whatever career he may choose. 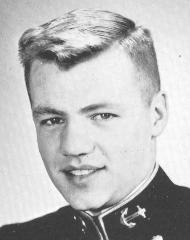 One of the best-liked men in the class, "Chills", hails from the thriving metropolis of Long Prairie, Minnesota. Always willing to lend a hand to anyone, his personality and ever present smile helped to make smooth sailing on many a rough sea. "Chills" devoted much spare time to developing many of his two week kicks, which took him from mythology and chess all the way to poker and bridge. His athletic prowess and untiring spirit gave a big boost to his Battalion's football and soccer teams. He was, however, no slouch when it came to academics. Armed with an outstanding personality, and ability to make friends quickly, and a keen mind, "Dave" should have no trouble achieving his life-time goal: to be a good Naval officer.