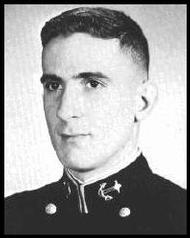 Hailing from the Hoosier State of Indiana, Chuck came to Annapolis after two years at Purdue University in West Lafayette, Indiana. Chuck made his presence felt Plebe Summer and continued to do so during his time at USNA. He was one of the all-Youngster infield in 1961, and he impressed many with his smooth play at shortstop. Chuck was always one for a lively party and exhibited his prowess in this field whenever leave, football trips, cruise, or a weekend came around. Quite an avid record collector, Chuck showed a partiality to good smooth jazz and was always in the mood to add to his record collection. An average student, Chuck appeared to have little trouble with the academics while at the Naval Academy. During second class summer Chuck enjoyed the flying and may try for a career in Naval Aviation. Whichever branch of the service Chuck chooses to enter upon graduation he is sure to be a success. He will always be remembered by those who knew him best as a good man with a tremendous will to win. 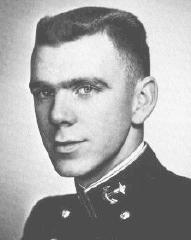 When Sam came to the Naval Academy from Brooklyn, he brought with him an untiring spirit and a smile. He could always be counted on for his support of any Navy team or to have a good word for anyone. Sam's main hobbies were swimming and playing the guitar. One could usually find him at the pool on his Battalion swimming or water polo team, and many a night was brightened by his guitar. Because of his easy going nature, great sense of humor, and natural talent for making friends, he became one of the most well-liked men in the class. Sam also had a serious side. While at the Academy he took his academics seriously and had little or no trouble. Whatever Sam does in the future, success and many friends will be sure to follow. 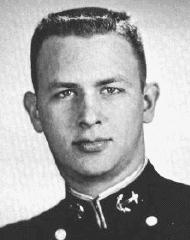 The Lone Star lost one of its best bronco busters when Larry decided to drift up East for a spell. From the big land of big men, came a big fellow named Larry, who was destined to make quite a name for himself at Navy. Quiet and easy going in the old Western tradiion, Larry was suddenly transformed into a vicious badman when he stepped onto a football field. Not satified with being standout tackle on the varsity football team, he also contributed his strength to the Navy crew team, where he became a fine oarsman. Academics posed no real problem for Larry and so a geat deal of his time was devoted to motorcycles and, of course, girls, as well as to a gigantic list of passing fancies. His personality was the kind that made him many friends and no enemies, with the exception of his opponents on the gridiron. Larry has set an outstanding pace here at USNA, and he will make just as fine a record in his years in the service.