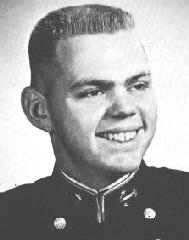 Though born in California, and a Navy junior with the usual list of former addresses, Wiley considers Charleston, S. C., his home and the South the seat of his loyalty. An avid sports fan and veritable walking encyclopedia of baseball, Wiley devoted himself enthusiastically to the sports department of the Public Relations Committee. His dry humor, friendly smile, and easy going manner helped Wiley to make friends with everyone he met, save only the Math Department which persecuted him relentlessly. A practicing advocate of keeping calm, he often defeated nerve-wracking studies by calm persistence. Nevertheless, he managed to keep a jump ahead for four years. A quick imagination made Wiley a natural at any sort of composition, be it letters, songs, or poetry with which he constantly delighted his classmates, The son of a shipboard officer, Wiley will join the Navy line upon graduation. 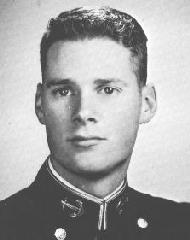 Dave, sometimes called Monsieur Le Blumel, in honor of his faltering French, came to the Academy from Altadena, California, via Colombian Prep School. Dave brought with him quite an array of talents, the most important of which was his ability to remain calm under any circumstances. This ability combined with an unequaled sense of humor made Dave one of the few men who really enjoyed Plebe Year. Dave has always been active in battalion sports, notably handball, and has been equally active in company activities. His free time has always been spent in the company of music or a girl, each of which reflected his superb taste. Dave's graduation will leave a gap in the brigade which will be hard to fill, but the Academy's loss will be the fleet's gain as Dave fulfills his lifelong ambition to become a Naval officer. 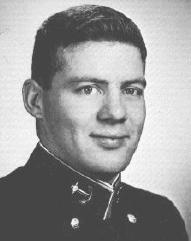 Bill came to the Naval Academy from the Land of Enchantment, New Mexico, where he often spent happy days on his Grandfather's ranch "punchin' cows." Bill attended the University of New Mexico for one year before entering the Academy. It was there that he picked up the nickname "Pete" which has remained on his calling card ever since. Track dominated his sporting interests at the academy, but his pursuit of a major soon led his energies along more academic lines. On leave one could always find Bill pursuing his most enjoyable interest, women. Bill was always quick with a smile and known for his jokes and untimely puns. He was always thoughtful and generous, making many lasting friends. His greatest joy was the mail call which never left his desk unoccupied thanks to the girls. His good humor and high spirits made him a credit to the Brigade and his drive to make the "best" better will make him as fine an officer as he is a person.