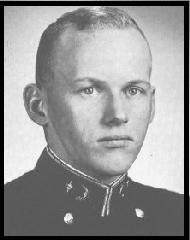 Orv came to the banks of the Severn from "The Land of Sky Blue Waters," after spending time on an aircraft carrier with the fleet and going to NAPS. He quickly assumed positions of leadership as battalion and company representative and was always in his class in both academics and aptitude, his name often appearing on the Superintendent's list. Orv, who could always be found playing a sport when he wasn't studying, was well known for his skill in the ring as a brigade boxer and was a dependable scorer on company fieldball and soccer teams. He never seemed to let anything bother him for any length of time. His cheerful attitude could certainly be attributed to the fact that he rarely missed a weekend of dragging his "One and Only." 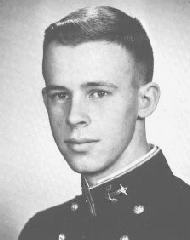 Ed is a New Englander, from the thriving metropolis of Manchester, New Hampshire. After graduating from Manchester High School, he arrived at Severn's shores just three weeks later! Despite his New England accent, which caused him much grief during plebe year, Ed was able to make himself fairly well understood. His only major academic barrier was the foreign language department. Spanish just didn't get along with Ed at all. The rest of the academic program only bothered Ed from time to time, as it did the rest of his classmates. During the spring Ed's favorite sport was golf. He was a fair golfer, but was tempted to break more than one club on the tough Navy course across the river. Upon receiving his commission on graduation, Ed will make a valuable addition to our nation's defense program. 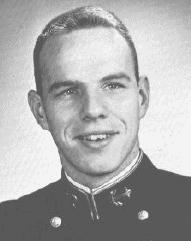 Navy acquired Ray from Nashville and Vanderbilt University. Here at Navy, his many abilities were soon in evidence in both sports and academics. After a season of sailing during plebe year, Ray devoted himself to intramurals, chiefly soccer and fieldball. During youngster year he was a standout on the Brigade championship fieldball team. His name appeared on the Superintendent's List many times, and Ray devoted a lot of time to maintaining his good average. This hard work and diligence is representative of his attitude toward any task he undertakes. His favorite liberty recreation (while within the seven mile limit, that is) was exercising on the blue trampoline. Always well liked by his classmates, Ray, with his easy manner and extensive talents, can look forward to a highly successful Naval career.