Frank, the Innocent, came to the Navy from Port Chester, New York, and soon became one of the most popular men in his company. Always ready with a joke, Frank could be counted upon to liven up any party. Although he helped the First Battalion swimming team to a Brigade Championship his youngster year, Frank was probably best known throughout the Brigade as the most-scored-upon goalie in water polo history. Aside from his many aquatic feats, Frank will always be remembered by many as the "Used Junk King." Whatever the market-used radios, used records, old hi-fi's, used jewelry-Frank was always there with the goods. With plans of a career in Naval Aviation, Frank will certainly be a credit to the Service. 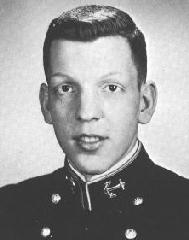 Gay came to the Naval Academy from Haverford Prep in Philadelphia, highly touted as a potentially great Navy swimmer. He let no one down, setting numerous records, pacing the Blue and Gold to victory in many swimming meets, and representing the Naval Academy in the National Championships. Swimming occupied much of Gay's free time, and each afternoon would find him working hard in the Natatorium. Although swimming was Gay's main concern during the four years here, he still found time to hit the blue trampoline regularly, and each weekend would find him with a drag on his arm. While Gay's academic records do not compare too well with his swimming, he seldom had to do much more than study a little to come up with a passing mark. Gay's easy manner and friendly personality insure him a successful Naval career and will make him a great asset to the military service, just as he has been to the Brigade and to the class of '63. 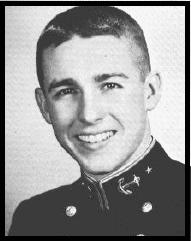 Rod came to the East coast from the land of sunshine and Rose Bowls, packing a flintlock across his arm. Soon Rod found a place on the Plebe Rifle team. A devoted fan of "Peanuts," he kept his bust of Beethoven polished to high gleam. During his spare time Rod could often be found on the squash courts or pursuing his interests in the Stamp Club. During the winter, he kept himself amused by bombarding the Plebe rooms across Kelly Court with snowballs. Never one to let studies get the best of him, he constantly maintained a Superintendent's List average. As of the present, "Navy subs are better than those surface ships" to Rod, but time will tell for sure.