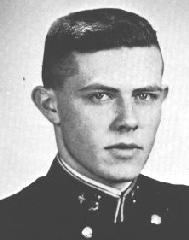 Jim came from the bustling metropolis of New York and entered these hallowed halls as "just another Plebe." However, "JJ" was never satisfied to be lost in the statistics, as he always stood high in academics and was a frequent member of the Superintendent's List. During recreation hours one could always find Jim with an oar in his grip, working at the one sport he could participate in while sitting down, crew. During his four years' stay at the Academy, Jim was active in the Newman Club and took a special interest in the French Club, since he absorbed languages quite readily. On weekends "JJ" was usually seen with a pretty girl, a different one every week. In future years Jim will be a great asset to the Naval Service, and his intelligence and curiosity will carry him far. 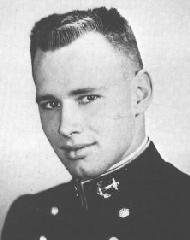 A Marine Corps junior, Jim left his home in sunny California to carry on the tradition. Always quick with a smile, he survived his four years without difficulty, except for a running battle with the English Department. The relatively northern climate of Annapolis was his other great source of complaint. Jim missed his December water-skiing. A great socializer, he devoted much time and energy to the Mid's favorite pursuit, women. Jim's relating of his exploits provided us all with pleasant entertainment. His high school wrestling experience always stood him in good stead. Following in his father's footsteps, Jim is sure to be a great asset to the Corps. You always knew when he was around, and these hallowed halls have lost what the Marine Corps has gained. Dave came to USNA from the Tall Corn State via Columbian Prep in Washington, D. C. His first taste of big city life convinced him that this was the life and that USNA was for him. While at the Academy, Dave's athletic interests varied from plebe crew to softball, volleyball, and football on the intramural level. His friendly manner made him a welcome addition to his class and greatly aided him in his special interest. This field of interest is femmes, in which the "farm boy" has proved himself quite capable. His favorite liberty spot was Washington, D.C., where he achieved great success Youngster year. His personality, keen mind, and willingness to work will stand him in good stead when he reports to the Fleet. Dave plans to pursue a career in Navy Line, preferably in submarines, and will be as welcome an addition to the wardroom as he has been to his class.