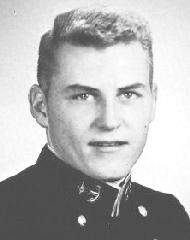 As a native of sunny California, Wayne came a long way to the banks of the Severn. An all-around athlete while at high school on Coronado Island in San Diego Bay, he decided to turn his athletic prowess toward gymnastics upon his arrival at USNA. After his plebe year and one season with the varsity, he was a fine prospect in the rope climb, but his career was cut short when that event was eliminated from intercollegiate competition. So, Wayne then concentrated on intramurals where he offered outstanding contributions to the company soccer and softball teams. Wayne is convinced that California is the only place to live, and he returns every chance he gets to enjoy the surf around his home. A pleasant attitude and sense of humor have won him many friends. Certainly his personal pride and exacting manner in all he does will make him a credit to the service. 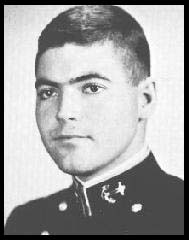 Jack came to Navy from West Palm Beach, Florida, redirecting his interest in the briny deep from sport fishing to becoming a naval officer. An indication of his professional interest and love of the sea was his enthusiastic participation in the Midshipman Sailing Squadron, where he began to learn the traditional art of a sailor-handling a taut ship in any wind. Crabtown winters discourage seafaring endeavor, so Jack turned to company sports, managing to remain in the great outdoors playing touch football. His interest in self-improvement led him into the science program which he eventually rejected in favor of a more liberal course of study, in addition to the basic course. Mac's clear thinking and open-mind coupled with firm self-confidence and a unique ability to make friends will make him a welcome asset in any wardroom. 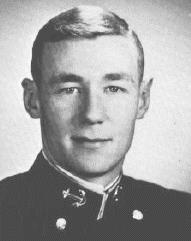 Jeff came to the Naval Academy after spending a year in the Ivy League at Columbia University, where he was a member of the NROTC unit. His relaxed, straight-forward approach to life put him at ease in all groups, and his enthusiasm and determination made him a credit to the Brigade. Jeff always liked the challenge and enjoyment that sports gave him. Among his many and varied interests were football, wrestling, handball, and golf. His relaxed and jovial personality made him a natural for the golf links. College inspired in Jeff a keen interest in the liberal arts. He continued to build on the basis he had acquired at college by spending much of his free time reading. Other free moments he spent listening to his collection of progressive jazz records. Along with his numerous interests, Jeff always made it a point to have a smile and a friendly word for his many friends. And if the quantity of perfumed mail he received is any criterion, he held his own with the girls. Jeff's mature, well rounded attitude will surely make him a welcomed addition to any organization.