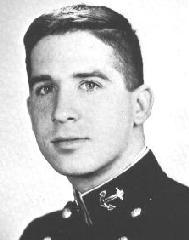 Dave or DBA, as he was more commonly known, came to Navy from the ranks of the Navy juniors. Having achieved his first goal of gaining active duty status, he set to work in earnest to develop his potential as a Naval Officer while becoming a member of the 12-hours-of-sleep-a-day set. DBA could always be found in or near his rack. Never one to worry about academics, Dave nevertheless always managed to avoid serious trouble in that area. A familiar figure at company volleyball and battalion football, he increased his professional training in the YP Squadron. With the utmost in ideals and degree of dedication, DBA is a competent addition to the Navy with whom anyone who has had the pleasure of his friendship would be proud to serve. 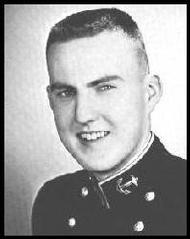 A native Chicagoan, Dan came to the shores of the Severn with an outstanding high school background in English and languages. He continued his language studies at the Academy, finishing the Russian course near the top of the class. The rest of Dan's studies proved to be no problem either, and consequently, he could often be seen escorting a certain pretty young lady about the yard on weekends. Dan's other extra-curricular time was spent lending his voice to the Catholic Chapel Choir. His quick smile and wit to match were attributes which made him popular with his classmates. In everyting he undertook, he was conscientious, sincere, and diligent. A summer of flying at Pensacola and Jacksonville convinced Dan that the life of a Navy pilot can't be beat. We are confident that the air arm of the Navy is gaining an outstanding member. 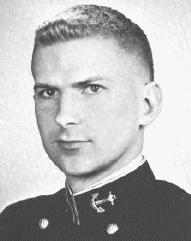 John came to Severn's shores after a year at Penn State where he enjoyed civilian campus life while pursuing studies in Electrical Engineering. This is where he got into the habit of studying in the pad which made plebe year particularly rough. This background, however, aided him in keeping well ahead of the academics with the exception of a few bouts with the EH&G Department. John's interest in music and drumming ability made him a natural candidate for the D&B Corps. His favorite hobby was stereo equipment, and you could always find him studying a stereo catalog or trying to figure out some new combination of sound effects. Johnny was quiet and reserved but made many lasting friends, and his standards of personal conditioning kept him high in his class in Physical Education. His perseverance and self-confidence will make him a valuable asset to any field of endeavor he chooses.