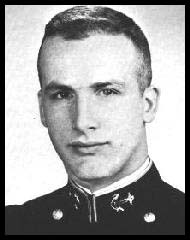 Mike Mullen, more popularly known as "Moon" throughout the Brigade, came to the Academy in a unique sort of way, through the Military Academy Prep School. As his classmates will testify, Mike is one of the outstanding members of '63. His ready smile and his willingness to lend a helping hand have made him a popular, solid citizen of the brigade. Although "Moon" waged a continuous battle with the skinny and steam departments, his persistent desire to do his best combined with his cheerful attitude enabled him to excel in this phase of academy life also. Mike is not all work and no play either. He was an active member of the Newman Club, the Portuguese Club, and the Reception Committee, as well as being a star performer in lacrosse, handball, and golf. The class of '63 is proud to have him as a member. 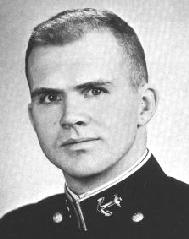 Known affectionately by his classmates as "Baldy," Dave hails from a little town just outside of New York City. He brought with him to the Academy his swimming ability which made him a mainstay on the Battalion swimming and water polo teams. While here, his casual, efficient bearing and respectful manner gained the respect of his classmates. Throughout the years, Dave could be seen perched at his desk lamp cursing his slide rule and the academic departments. But, although he studied a lot, his mind was often occupied with thoughts of Norwalk, Connecticut. A good practical joke on his roommate was not uncommon, and he found his favorite relaxation drinking and singing at a crowded table in his favorite Rathskeller. Dave, with his outstanding personal appearance and tact will make an exemplary Marine officer. 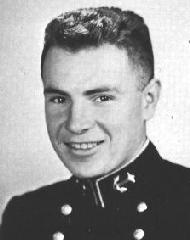 Charlie came to USNA from Cardinal Hayes High School in the Bronx, bringing a marked accent with him. Here he immediately joined the Newman Club and settled down to four years of Academy life, during which he developed into quite an expert on Rock and Roll, as well as on girls. It seems he had a girl in every port, including the Yard. Proving himself consistently up to the academic challenge, he was equally competent on the athletic field, where he helped Club II win the Brigade soccer championship early in his stay. Charlie's joviality and buoyant spirit never failed to lift the spirits of those around him. Not the least bit backward, he always had plenty of friends and will find many more in Naval Air.