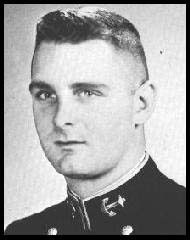 Ken, a Navy junior, came to the Academy via Bullis Prep. with a burning desire to follow the footsteps of Captain Nisewaner. Although his grades were not quite Supt.'s List material, Weener's blue and gold spirit of competition and ability to get the job done left nothing to be desired. An avid sportsman indoors and out, his athletic ability was of the highest caliber, as were his ratings with the girls. Weener was never one to miss a good party, and when not dragging could usually be found working out to hold down his position as catcher on the varsity baseball team. His individualism failed to detract from his military bearing and he was outdone by few at inspection. Only the top of the ladder would satisfy Ken and we're sure he'll attain it whatever course he chooses to follow. 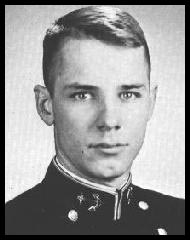 George gave up a carefree college life to come to the Naval Academy. Having this to his credit, he left San Pedro, a small but famous town near Smogsville, USA, for the sometimes sunny shores of the Severn to excel in bigger and better things. Holding a steady course, Rip plowed through academics, meeting every resistance with an all out effort. It was a pleasure to have him on your sport squad because his never-give-up attitude and spirit made victory sweeter and defeat a little more bearable. Never at a loss for something to do, he filled his spare time representing the Log and Splinter, circulating the Drag's Handbook, and logging in pad time. Weekends found George in the company of a charming and beautiful girl. Whether above, on, or below the surface, he will be an asset to the Service. Turning down several scholarships for an opportunity to begin his Naval career immediately after high school, Chuck came to us from Long Island, that land of beautiful young ladies and easy access to the "City." On and off the playing fields, the "Leprechaun's" quick and subtle sense of humor was a delight to all who knew him. Although sports and company activities took a major portion of his time, Chuck still managed to stand in the top quarter of his class academically. A conscientious and devoted person, Chuck seldom fails at that which he attempts. His ability, joined with his driving force and fighting Irish spirit, indicate that the Navy has gained a fine career officer.