Tom, a big typical Texan, made a big hit with everyone at USNA. At the same time both hard-working and easy-going he always managed to hang onto the Superintendent's List, with Math and Science his specialties. Great amounts of time and effort were devoted to Reef Points and to pulling classmates out of academic bogs. Size and speed made him a standout in fieldball and battalion lacrosse and football. While on the quieter side, he was active in NAFAC and the Newman Club. Tom never sweated the girls a great deal but always had a good looking drag for any occasion. Known everywhere for his bullwhip, he never got around to using it on the plebes as intended, but he did acquire a lot of skill at picking locusts off the furniture. A true gentleman, Tom will long be remembered and well appreciated in the fleet. 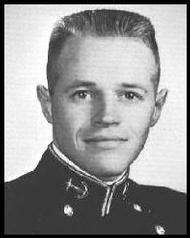 While attending high school in the home of five breweries, Jerry spent most of his free time at the nearby airport, letting his interest in aviation grow and grow. After not making the Academy on his first try, Jerry joined the Naval Reserve and went into submarines. At the same time he attended an extension of the University of Wisconsin, where the law made him a part of the local ROTC unit. This year proved well spent for he received an apointment through his reserve unit. After plebe year Jerry began taking "dealer" training by selling Logs, Drag Handbooks, and WRNV goods. He was always encouraging someone to requisiton from his graduation pay for some blue and gold wares. Sports-wise Jerry was standard equipment of the cross country team for the first two years, but later seasons saw him getting involved in company and battalion sports of higher prestige. He especially enjoyed 2/c summer with its flying by day and other activities by night. Naturally, Jerry's plans lie in Navy Air. We know he'll succeed in this and any other venture he undertakes. Our best wishes are with him in his future. Jerry, always the Southern gentleman, had exquisite taste in wine, women, and song. His large stack of fine classical and modern jazz records was always open for loan. As far as women go, Jerry changed them often. Military history was his hobby before entering the Academy. It is even said that upper classmen came to Jerry to find answers to their questions. Jerry took an active interest in WRNV and was instrumental in helping to provide the fine popular music concerts as we have had year after year. In the years after graduation we look for Jerry to fly many hours for the Navy. He tells us he's going to do it by hook or by crook.