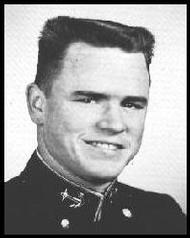 Having come to the Academy from Bullis Prep, Skip easily made friends and was known by his classmates as "The China Clipper." A hustling halfback on the battalion and company 150-lb football teams, Skip made many sensational plays; however, a dislocated shoulder and subsequent operation ended his football capers. Skip also did an outstanding job as a catcher and shortstop of the company softball team. As a member of the Public Relations Committee, Skip spent many Saturday afternoons in the press box assisting the coverage of Navy teams. Always having that certain way with the young ladies, this red-haired Midshipman got into many social predicaments, including three dates for an Army game. Skip's ever present sense of humor always brought laughter to his classmates. His deep interest and first-hand knowledge of the Navy will make Skip a successful officer in the fleet and a credit to the Naval Academy. 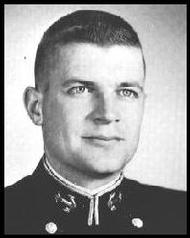 Tom came to us after a year at Stephen F. Austin College in Sherman, Texas, where he excelled in football and student activities. Tom, like most of his classmates, found plebe summer to be quite different from past experiences. However, it didn't take him long to become acquainted with "the system" and to realize its importance. When the Brigade returned, his quick thinking and ready wit were quickly brought to the attention of the upperclass, and he was always in demand any time there was a company party. A good all-round competitor, Tom played on many championship company teams. What a team lacked in ability, Tom made up for in spirit, with a word of encouragement for everyone. Tom's well rounded personality has made many friends for him throughout the Brigade, as well as with members of the opposite sex. These, together with his personal character and sincerity, are great assets and should enable success to follow him in whatever branch of the service he chooses. 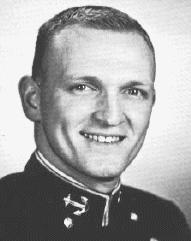 Daryl came to the Naval Academy from little Moravian College, which, like his home town, is located in the Pennsylvania Dutch region. Daryl's favorite pastimes included eating, sleeping, writing letters, and listening to music, as well as associating with the opposite sex. His other interests included the Public Relations Club and the German Club. A hard worker in all that he does, Daryl was one of the outstanding athletes in the company, playing on two Brigade Championship volleyball teams. A welcome addition to any group, Daryl's warm humor and friendly smile made him many friends here. A good party man, Daryl will be a welcome addition wherever duty calls.