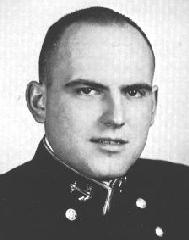 Known as a man with a keen sense of humor, Frank livened up many dull moments here at USNA. Frank spent two years at Ohio State University and was in Delta Tau Delta fraternity before arriving here on the Severn. He played plebe football, but due to injuries and advancing old age, decided to give up varsity football. He has worked hard and given freely of his time to the wrestling team while serving them as manager. Academics have never been easy for Frank, but he has shown an indefatigable determination to succeed. Frank has an extremely likeable personality and combined with his quick wit, he has cultivated many lasting friends. Music is one of his favorite pastimes. With his easy-going nature and determination, he will be a credit to the service or any other aspect of life he undertakes. 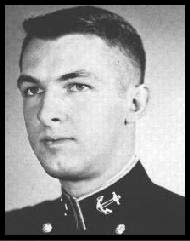 Plebe year opened wide the eyes of this hero from the Severn, and there were times that he had to retreat to the safety of the blue trampoline. "Stick" came to the Academy straight from high school and in no time at all, established a reputation among his classmates in academics and athletics. Being a consistent and hard worker, he strived to maintain a Superintendent's List average. A little tall, Ray could often be found on the volleyball court or fieldball field. His pleasant and cheerful manner always assured him of success and many lasting friends at the Academy. Upon graduation, he plans to spend a year in Navy line, and then go on to a career in Naval Aviation flying the newest Navy patrol planes, 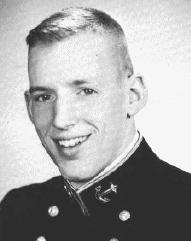 Don came to us from Haddonfield High School in New Jersey where he was an outstanding athlete. At Navy he continued his athletic prowess while playing varsity 150-pound football and lacrosse. Those long hot days at the rifle range during plebe summer afforded him the opportunity of winning his expert pistol medal. Plebe year found him playing saxophone for the concert band. His musical talent lay not only in the sax, for he could also be heard playing the piano, harmonica, or ukulele during his free time. Don's smile, wit, and high spirits proved to be indispensable to morale during his four years. After graduation he will be wearing his brand new shoulder boards to Pensacola where he will earn his wings of gold.