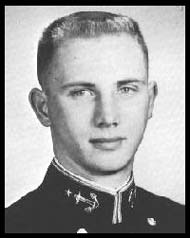 Ron was born in Berwyn, Illinois, where he graduated from Sterling Morton High School as an honor student and star athlete in baseball, football, and gymnastics. Entering the Academy directly from high school, he soon established himself here as well. As a plebe he participated in gymnastics and led the plebe baseball team to a great season. As an upperclassman he became known as "Navy's Little Gun," leading off and playing third base for Max Bishop's fabulous baseball team. Always hustling, in academics as well as in sports, Ron maintained his academic stars and enjoyed the privileges of the Superintendent's List through the years. Besides being a member of the Academy Science Seminar, he overloaded his schedule with additional electives, majoring in nuclear physics. He has always enjoyed studying and is looking forward to post graduate school.

Paul blew in from the deep South, extolling the virtues of southern belles, bird dogs, creole gumbo, and Pat O'Briens's Hurricanes. The Academy was quite a change from "The City That Care Forgot" but an easy going attitude and good sense of humor helped him to hold his own in academics. His favorite subjects were math and engineering. Squash, handball, company football, and ocean sailing helped keep Paul busy after classes were over. During plebe year, the upperclass were quick to note his famous name and made him the scapegoat for many jokes and pranks about the original "Midnight Rider." Because of his ability to get along with people, he has a tremendous number of friends throughout the Brigade. In Paul, the Navy will no doubt find a hard working junior officer. 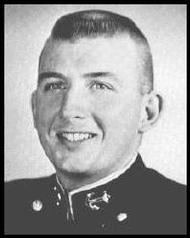 Big Jim, the tall Midwesterner from Beloit and Marquette University, signed on the dotted line and spent two years with the Marines in Okinawa, where he found the life he wanted to live. The Marine Corps, girls, and good food are his weak points. Well liked by all his classmates for his good sense of humor and his friendly manner, Jim never got lonely back in the hall. He was never at a loss for mail, and he spent many a day dragging, too. Able in sports, he helped boost several battalion and company teams to Brigade championships. Although good with his slide rule, his favorite subjects were in the department of English, History and Government. His favorite daydream of the future: reviewing the parade on a Wednesday afternoon, as Commandant of the Marine Corps.