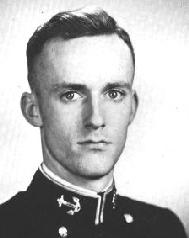 Coming to us from Kent School, Ned, or "Rux" as he was known to his classmates, was no stranger to the regimented life. With a father of flag rank, he was no stranger to the Navy either. In the autumns "Rux" put his high school soccer to work, and he made the plebe and JV squads. He kept right on running in the winter, gaining many points for the company cross country team. Ned's intellectual abilities enabled him to whip off homework and still keep up a large volume of correspondence with his various relatives. With his always friendly, jovial personality, we are sure Ned will follow in his father's footsteps to fame in the Navy. For "Rux" it's "Bell bottom trousers, coat of Navy blue, he'll climb the rigging like his daddy used to do." 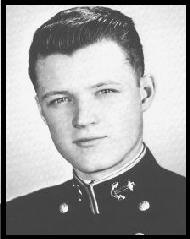 Born and raised in Sweden, Lars was surely the Brigade's only Swede with a New York accent. On those weekdays when his pad was empty, Lars could usually be found playing either squash, tennis, or soccer. Having returned to Europe for his leave after Youngster Cruise, Lars decided he was at a lack for words South of Copenhagen, so on his return, he decided to overload in German. Always a good student, Lars was consistently kept off the Superintendent's List by having an excess of demerits. Keeping up his reputation with the fairer sex, Lars had the rare distinction of having his company officer reprimand him for being too much of a ladies' man. Graduation should see the "Smiling Swede" on his way to Pensacola, where he will be flying Navy jets and his own Corvette.

Don, living in Washington, D. C., was one of the few men who took the weather at the Academy with a smile. As a matter of fact, Don took almost everthing with a smile. A rather easygoing, quiet individual, Don spent most of plebe year on the water, rowing with the crew team. Known to many for his sensational, dry humor, Don was always a most enjoyable person to be with. As far as other sports go, Don played company soccer and cross-country. He was also a member of a championship battalion track team. Academics were a breeze for Don, especially math. Always found munching on someting, Don became quite a connoisseur of good food. Whatever part of the service Don joins, he will be sure of success.