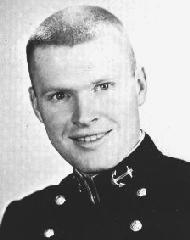 Jim, originally a native of New York, comes to us from the shores of the Anacostia River in Hyattsville, Maryland. Graduating number two in his class from St. Anthony High School in Washington, D.C., Jim enrolled here with "stars in his eyes and water behind his ears." Early voted by the members of the upperclass as "Most Unlikely to Succeed," he has long since come down out of the clouds and even waged a successful, though arduous, battle with the Science Department. Jim loves sports of all kinds, but participates mostly on the informal level. He has taken an active part in everything from battalion boxing and company football to a tour of duty with the YP squadron, and would probably make someone a very good recreation officer. Although accepting the way things are done around here, Jim vows, if ever selected as Superintendent of the Naval Academy, to grant the first and second class more weekends, delay reveille one full hour, and strike fresh garden kale from the menu. Bismarck once said, "To youth I have but three words of counsel- Work, Work, Work." Scotty has taken this advice and is not happy unless he is working. The salvo of regular academics wasn't enough for Scotty, and he resorted to taking several overloads. To round out his twenty-five hour day, Scotty joined the YP Squadron and the radio club, and he enjoyed a reputation in the YP Squadron as one of the foremost experts on the engineering plant. With this full schedule, it soon became necessary for Scotty to establish himself as an expert on "blanket late lights." Our young scholar was always willing to take a break to dispense some of his broad knowledge about academics, women, bridge, or Texas. We know Scotty will be a prominent asset to any outfit he joins, as long as there is knowledge to be learned and a tough job to be done. Chuck, a Navy junior, lived in many places and attended many schools before settling down in Mother Bancroft's halls. Navy destined all the way, Chuck joined the Navy two weeks after graduation from Washington-Lee High School. When he found his eyes temporarily would not allow him into the Naval Academy Preparatory School, he took the long way home by going to the Military Academy Preparatory School. While at USNA as a confessed, happily pinned mid, Chuck could often be found engaged in weekend extracurricular activities; however, during the week he spent time in various sports including battalion wrestling, company cross-country, and varsity dinghy sailing. Chuck has won his battles with academics, principally the science department, and looks forward to a career in submarines. He will be a welcome and capable addition to the fleet.