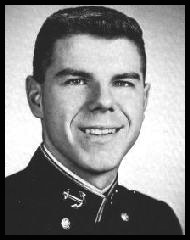 Tom came straight from high school to Navy from the hills of West Virginia. He could call many places his home, but the one place that never changed was his cottage on the Potomac. There he founded a love for boats and water sports, which carried through to the Academy. Although standing high in academics, he was never one to study so hard that he had no time for outside activities such as the Gun Club and Newman Club. No slouch on the dance floor either, he could always be counted on to show a drag a good time on the weekends. Good at any sport, Tom tried squash and could always be found standing high on the company ladder. His athletic ability was also displayed on the battalion handball and swimming teams, as well as the company basketball team. With these attributes we know Tom will be a success at whatever he decides to do and will always be remembered as a good friend, 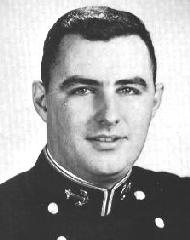 One of the athletes from Pennsylvania, Ed came to Navy having spent a year at Builis Prep, lettering in baseball and football. Previouslv, Ed had captained the baseball, basketball, and football teams of his high school. The strong desire to become one of Navy's varsity football players and a capable mariner of the YP fleet brought Ed to USNA. Not only has he starred on the gridiron, but also in the intramural sports of softball and basketball. Though he has had his ups and downs (mostly downs) with the Executive and Academic Departments, his will to win and determination have helped him to survive. This same determination and will to win will surely contribute much to Ed's success as an officer in our armed services. 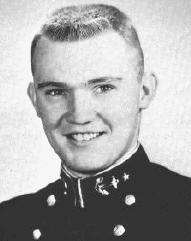 On a warm summer morning in 1959, Walt bade farewell to Plaistow, N. H. and headed for Annapolis to fulfill a lifelong ambition. Arriving straight from high school, Walt found the academics a challenge soon mastered, and he stood near the top of his class. Thanks to his proficiency in academics, Walt found plenty of time to pursue the fairer sex and excel in company and battalion sports. With the combination of Glee Club and Chapel Choir trips and Supt.'s list weekends, Walt was rarely found in Crab Town on weekends. When asked about his main interest, he is always quick to reply, "Graduation." Walt's keen sense of humor and his genuine devotion made his four year stay enjoyable for him and a little more pleasant for everyone around him. Best of luck to a swell guy-although he probably won't need it since he always gives his all.