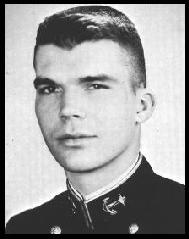 Bill came to USNA from Gods Country on the California-Mexican border, but only after spending a lot of time seeing the world as a Navy Junior. After some close shaves with the Engineering department, Bill buckled down to the tough academics of the academy, even employing a California cactus as a good luck charm during second class year. Bill possesses a tremendous amount of drive, which enabled him to intensify his efforts by sheer will power when necessary. Bill came to Mother Bancroft with very little knowledge of the fairer sex, but he soon made up for lost time. The same warm smile, sincerity, and honesty which won him a place in the hearts of his classmates won him the hearts of many female admirers. In addition to his interest in world affairs and good looking drags, Bill was well known for his efforts on cross-country course. 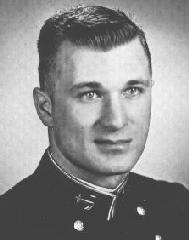 Erwin came to the Academy after a successful year at Columbia Preparatory School. Best known for his outstanding ability on the football field, Erwin also used this ability in other sports after the fall season. Not one to devote himself only to sports he showed the same enthusiasm in other outside activities. Although academics were not easy, Erwin excelled in this phase of Academy life also. As his classmates can testify, Erwin was always ready with a quick wit that kept things moving during the slower times of the year. Throughout his stay at the Naval Academy, this man has gained the respect of all who have come in contact with him. This respect combined with a rare natural leadership quality will carry over to his career. 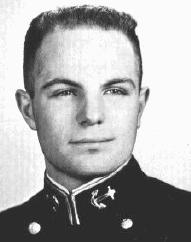 Mike came to USNA from Scranton, Pennsylvania. He graduated from high school there, and continues to call that city home. Inheriting his talent with words from his father, a well known journalist and editor, he has devoted the major portion of his academic efforts to the Language and English, History and Government departments, ranking quite high in both. His extracurricular activities included plebe debating and work with the Masqueraders. Despite his literary interest and his overload in language, Mike managed to make the Superintendents List and to lend great support to battalion and company sports teams, of which several were brigade champions. Mike will be remembered by his classmates for his quietly friendly manner, his willingness to assist anyone who needed his help, and his deep devotion to the Academy.