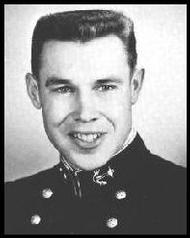 Born in Latvia during the rise of totalitarian power, Al survived the turmoil, hunger, and devastation of World War II in Europe. Then, without knowing any English, he came to the United States where he graduated from grade and high school. He entered the Academy from the regular Navy to further his professional education. Although never a quitter, Al has had a hard time with other than professional subjects while here. Participating in the German Club, Art Club, Photo Club, Foreign Relations Club, Antiphonal Choir, and the Log shortened study hours, as did sports, all of which Al tried to master. His favorite goal was a Brigade boxing title, while other pet projects included track and instructing swimming to his fellow amphibians. On weekends you could see Al occupied with a tennis racket, sailboat, paint brush, Leica, or just strolling along the moonlit Severn with his favorite Princess. 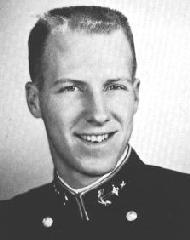 Twig came from Arlington after spending one year at George Washington University. He brought with him the reputation of being one of the finest athletes in the Washington, D.C., area, and Ron lived up to his reputation. Picking up letters in basketball and baseball, he proved to be one of the best athletes in the class. Twig also has been consistent in his appearances on the Superintendent's List and is one of the higher academic men. His number one hobby is listening to music; and according to Twig, the only real music is Rock and Roll. Ron's desire and sincerity have won him many friends and will prove to be the beginning of an outstanding career in the Navy. 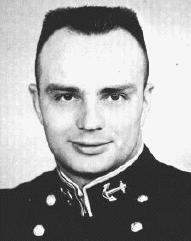 Hailing from Clearfield, Pennsylvania, Gary came to Navy known for his wrestling proficiency. He didn't disappoint anyone either, for he was well known in the wrestling loft while at the Academy. Possibly even as well known was his ability to make friends, for this certainly was not hard for Gary. With his carefree personality and cheerful outlook, Gary plugged through plebe year and the last three years without much trouble except for a few bouts with academics. A constant worker, Gary possessed a deep devotion to his future career. His various interests carried into many diversified fields ranging from literature to sports. In the future, Gary is bound to succeed in any endeavor whatever it may be, not only because he is a well liked person, but also because of a special type of perseverance.