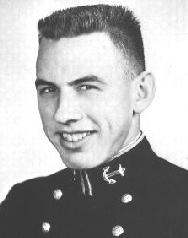 Not wishing to leave his native state of Maryland, O. D. became one of the integral parts of USNA. Hailing from Monkton, Maryland, Olen carried through the gates, not only his subtle humor, but also a continual and open friendliness. His determined desire to excel in any undertaking brought him through the four year strain of the Academy. Realizing that the future held the confinement of sea duty, O. D. put some extra mileage on his legs by running varsity cross-country and track, where again his determined desire to win took him to the top. When Olen takes his place in the fleet, he will be well qualified to assume his career responsibilities. Qualities of personality and leadership which brought him through the past four years will stand him in good stead in the years to come. 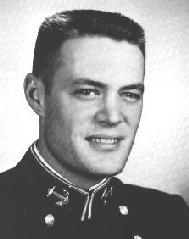 Jack came to the Academy after spending a year at Sullivan Prep School. He brought with him a superb sense of humor, a winning personality, and the desire to excel. Armed with these weapons, Jack had comparatively smooth sailing during his stay here. Throughout the four years he was very active in company sports and activities, and his natural linguistic ability kept him quite busy as a member of the French Club. In spite of all these outstanding qualities, Jack was always best known by his fine taste in drags. Whether he was sailing, swimming, or just sitting, Jack's liberty time was usually spent in the company of a fine example of the fairer sex. Jack has always looked forward to the career of a Naval officer, and we know that the Navy always has and always will look forward to accepting men of Jack's caliber into the fleet. 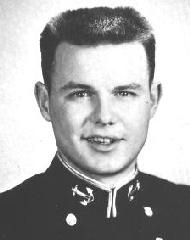 Marty came to the Naval Academy after a varied and stimulating youth. Being the son of an Air Force officer, Marty has lived in many locations throughout the world. Immediately before attending Navy, he spent a year at the University of Nebraska, and a year at the Columbian Prep School. While at the Academy, Marty vigorously and enthusiastically pursued extracurricular activities as a member of the PRC and as an outstanding player on the company sports teams. The academics at the Naval Academy were no easy battle for Marty. Through determination and persistent application, he was able to maintain the required standards of proficiency. Wherever Marty goes he will be known by his sincere, friendly smile, his desire to assist the troubled man, and his will to succeed.