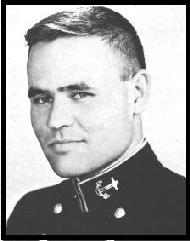 Denny is a Navy junior with many duty stations behind him. In spite of his Navy background, he has chosen "high and dry" Oklahoma as his home state. From his choice of states, complications have arisen for Den. As everyone knows, all Oklahomans are part Indian and furthermore Den's father is a "Chief"-U. S. Navy type. As a result of his English-Irish lineage, he has had to add Comanche. The nickname "Injun" was given to him during plebe year and has carried over during his tour of duty at USNA. Foreign Languages is one of Injun's special interests. He has gained a fair working knowledge of French, Russian, and German and has participated in the various language clubs while at the Academy. Eying a Naval Language School after graduation, he hopes to go into intelligence or Embassy duty. 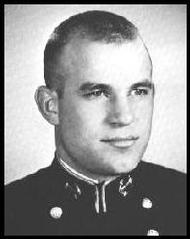 Hailing from Ramona, California, Chuck came to the Naval Academy via the Regular Navy and via the University of California at Riverside. An excellent broad jumper, he belonged to the varsity track team two seasons of the year. With academics no great source of trouble, Chuck has found time to be in the company of various charming young ladies on weekends. Set-backs were kept in their place by a ready smile and a sardonic sense of humor. Combined with drive and initiative, these attributes will provide the Naval Service with a capable and conscientious officer of which it can be proud.

Bill, an Air Force junior, entered from Limestone, Maine, a booming town of 1100. He is used to traveling around and his Youngster Cruise proved a disappointment when the only port of call turned out to be Norfolk. Bill breezed through plebe year, taking off on sailing weekends in the fall and spring and hibernating on the plebe gymnastic training tables during the winter months. Most breezy afternoons found him out sailing on the Severn in dinghies although he did climb aboard a yawl long enough to win the Youngster Race and to make a couple of ocean races. Bill has worn stars here at the academy for his outstanding academic performance. Still, Bill's number one problem during the second class campaign seemed to be squeezing in dragging time between regattas and quizzes in his eight subjects per semester. In whatever branch of the Navy Bill enters, we are sure he will have a fine career.