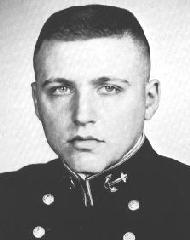 'Doc' came to the Academy from California, bringing with him a great interest in sports. Many opponents who faced him on the soccer and football fields will tell of his ability and hard drive in athletics. Although he excelled in the English, History, and Government Department, 'Doc' will also be remembered for his constant battle for survival with the Engineering Department. He proved his right to be a Midshipman, though, and his friends were proud of 'Doc' for his ability to produce under these severe strains. Although he needed his free time, he nonetheless supported the activities of the Brigade as a member of the Catholic Choir and the Italian Club. His determination to make the grade and succeed as a Midshipman will undoubtedly carry over into his career as an officer and will assure him complete success after graduation in whatever field he enters. 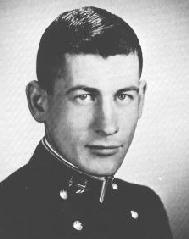 After high school in Omaha, Nebraska, Dave journeyed to the East to prep school knowing that his only ambition was an insistent desire to enter the Academy. After a year of supreme effort, Dave finally realized his ambition. From that moment on he strove towards one goal, that of becoming a man of high ideals and of deep dedication to country. While at the Academy, Dave was active in many company sports, including soccer and fieldball. Through perseverance and desire, Dave became a proficient athlete. In addition to his athletic endeavors, Dave always drove himself tirelessly in his efforts to excel in academics and personal appearance. This continuous attempt for perfection, coupled with a likeable personality, should stand Dave in good stead as he pursues his service career. 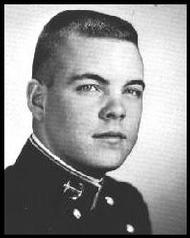 Voted by his high school as most likely to secceed, Fred (or Vogues, as he is affectionately known to his classmates) leaped into the Navy with a barbell in one hand and a lacrosse stick in the other. He has since become, "if not the best athlete, at least the best in health." However, for at least one season, he was the Brigade's highest scorer in Battalion lacrosse. Always the life of the party, as anyone who was ever in a cruise group with him will readily testify, Fred will long be remembered for the fabulous times he organized and the beautifu women he dated. He also had the uncanny knack of making people feel good just when things were going badly, even when they were going badly for him. In addition to being a real man's man, Fred's ability to keep his sense of humor will take him a long way toward his goals.