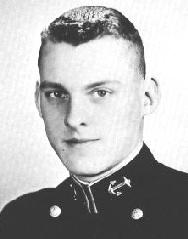 Pete found his way to the Academy by way of St. Mary's High in Katonah, New York. A varsity basketballer for three years there, he strove towards that goal here. When not playing basketball he could be found on the tennis or volleyball courts, in the steerage, or in the pad. Attention to academics was not one of his noticeable attributes, and at exam time his contributions to Tecumseh were a well founded investment. Deeply interested in the social development of his classmates, Pete willingly sacrificed his time to arrange drags for those who were without contacts. He did quite well in the Cupid department himself, however, and could always be found in the company of the fairer sex. Pete has an unending supply of friendship and good will which enables him to associate freely with almost everyone. Whichever service he chooses upon graduation, Pete will be looked upon as an outstanding officer and individual. 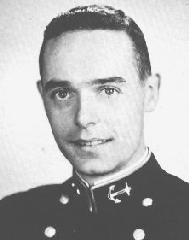 Immediately after graduating from high school in Staten Island, Mike stowed his zip gun and packed his bags to head for Annapolis. Having been observed by Navy scouts, he at once went out for plebe baseball as a pitcher, and has since progressed to the varsity level. Being a very good athlete and having a wide interest in sports, he also contributed to the company basketball team. With his fantastic sense of humor and wit, Mike is a riot in any crowd. Tales of New York plus a string of sea stories as long as his pitching arm give him a remarkable line with the opposite sex, though he is pretty well decided on his one-and-only. In musical taste, he is one of the most rabid and unashamed fans of "rock and roll" in the Brigade. Mike's future holds a career in Naval Air and a little white house later on. Admired and respected by those who know him, he is sure to have a long and fruitful career. 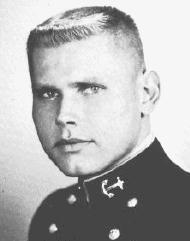 Art came to Severn's shores via a SecNAV appointment after attending the Naval Prep School. He calls Fullerton, California, home. Claiming there is no place quite like California, he is looking forward to being able to once again spend some time there. A confirmed hotrodder, he desires a hot car, a pretty girl beside him, and an ice-cold shot of Southern Comfort-with just a squeeze of lime. Convinced that the only real navy is the Silent Service, he is looking forward to attending sub school shortly after graduation-strange for a man so crazy about sunshine. Academics, tennis, and waterskiing seem to be his primary interests. He only found continuous fault with one thing while at the Academy, the whole system. "Things will be different when I'm CNO," he says. Good Luck, Art.