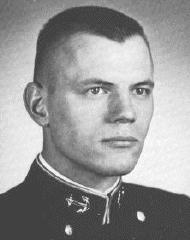 Andy is known best by his classmates for his amazing ability as an artist, and, although not possessing many spare moments, he somehow finds time to contribute greatly to the many varied Brigade publications in this field. His interests included, besides art, electronics, music, and rowing. The latter is exemplified by his participation in varsity heavyweight crew. In this field John has reached many desirous goals -- including participation in the 1960 Olympic Trials in which the plebe crew placed fourth, and the many achievements of the Navy Crew since that time. His future will undoubtedly be highlighted by many successes that are the result of his own hard work and sincere personality. 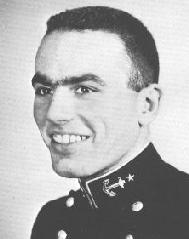 Whenever the syllable "Lund!" rang throughout the halls, only one person could respond to it. The Bronx, New York's gift to Navy would come strolling down the corridor in his usual shuffling manner. Some of Lund's more serious activities included beer mug collecting, beach parties, debutante balls, and an intensive study of skirt-lines. However, to break the monotony, Dick sang in the Catholic Choir and devoted much effort to the Brigade Forensic program. In the athletic vein, Lund could be seen daily streaking across the fields in training for varsity track. To satisfy a hunger for intrigue and travel, Dick has hopes for a career in submarines or in Naval Intelligence doing attache work. He has much to offer the Navy and his flag. This is easily seen since he is determined to utilize the benefits of four years of study in that direction. 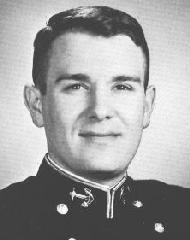 Dick hails from the land of Connecticut Yankees, and after a year of preparation at Bullis Prep, he came to the Naval Academy to be transformed into the spit and polish of a midshipman. After his escapades of plebe year, Dick quickly assumed the sleeping life of a youngster in all of its pomp and glory in his second year. Although not one to be tied to one femme, it seemed Dick was a frequent visitior to St. John's during his stay. Though not a varsity athlete, Dick was an avid enthusiast for intramural sports and could be frequently seen with the battalion or company softball, football, or fieldball teams. He was also a member of the Naval Academy Christian Association and the Automotive Engineering Club. Plebes were quick to realize his quest for knowledge and interest in the silent service, and we, his classmates, expect to see him conning a submarine into port for his favorite pastime -- liberty.