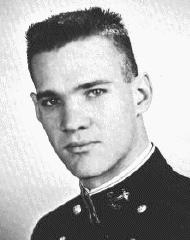 Harold hails from Texas, coming to the Academy directly from high school. Since he has been here, he has displayed an avid interest in Brigade activities and is a member in both the Chess Club and the Stamp and Coin Club. During the winter he participates in Brigade Boxing, and he works equally hard at intramural sports during the other seasons. Harold possesses a warm friendly personality and can always be depended upon to help out where needed. His easy going attitude about life makes him esy to get along with. His philosophy about life is that there is some good in everyone and, if given a chance, it will show up. We, his classmates, feel that he will be equally as successful in the Fleet as he was in the Brigade and wish him good luck and good sailing. 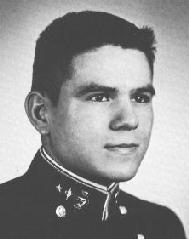 Well known for his friendliness and willingness to help his friends, Lionel has made his years here a success all the way. Not only has he been able to outwit the Academic and Executive Departments, keeping himself on the Superintendent's List for all four years, but also has made his presence felt on the athletic field. No slouch in the female department, he has managed to spread his talents around and still put time on the Reception Committee and Pep Club. A well-rounded gentleman in the true Navy spirit, he has learned to enjoy all the privileges and responsibilities that go along with this title. With a future in subs uppermost in his mind, Lionel will prove to be a credit to the Fleet as he has been to the Academy. 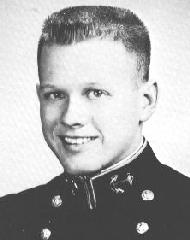 Fred came to the Naval Academy from Warwick, R. I., via Sullivan Prep School in Washington, D. C. He excelled in company 150# football, although he never played in high school. Football was second to boxing, though. His quick hands and desire made him a contender to be dealt with each year. He was one of the few men in the Brigade that had dragging down to a science. At the beginning of each semester, Fred would take out his Trident calendar and map out his weekends for the whole semester as regular as clockwork. He was on the flying squadron every other weekend. Fred will stick with the Navy after graduation, and the Blue and Gold will be getting itself a tremendous young officer.