Traian came to the shores of the Severn after attending the University of Akron for two years. Since arriving at USNA, he has injected his unlimited energy into all the activities in which he has participated. Tra's particular interests are the Foreign Relations club, NACA, and intramural sports. During his free time he has become keenly interested in hi-fi systems, constructing his own stereo amplifer and tuner. Tra's greatest pleasures, however, come every leave period when he is able to fly back to Ohio to visit with his family, leaving the Executive Department in a state of concern over his well planned time schedule. In the intramural sports program there is none as aggressive as Tra, believing that there is only one reason to play and that is to win. In spite of this keen determination on the athletic field, off the field he is a true friend and will go to no ends to help others. With his drive and enthusiasm, Traian will be a fine officer in the sevice which he enters upon graduation from the Academy. Fresh out of Ogdensburg Free Academy, New York, Russ decided to come to the Naval Academy. He was very active in intramural sports, participating in cross-country, softball, and soccer. Russ belonged to the French Club, NACA, and was on the layout staff of the 1963 <I>Lucky Bag</I>. Always cheerful and willing to lend a hand to the common cause, he helped win the colors for the Twenty-first company his youngster year. As he is very proficient in the French Language, Russ took several overloads in French. He is looking forward to a career in the Naval service, and we wish him the best of luck in all he does. 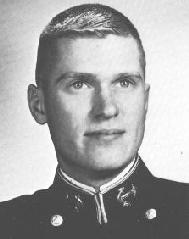 Although his home is in Oaklyn, New Jersey, Dave, or "Bingy," always speaks of "down at the shore" as being the place to be. Before giving the Academy a try, Brown University and NROTC were "Bingy's" claim to fame. The ivy-league touch impressed him so much he has a "button down" mind, especially with that ivy-type haircut. Tennis is "Bingy's" main interest in sports and a battalian championship the highlight of his ability. A multiunit stereo with the hidden bass speaker was the chief source of interest at the Naval Academy and it competed with the German Club for his time. As with anyone else, Bingy had his dislikes. English was the chief and almost the only one of these, however. We must compliment him upon his organization, especially in his room. In fact, "Does a person or a machine live here?" was a common comment in his room. With his offhand manner and quick wit, Bingy is bound to be a great success in the Fleet, and a promising career is evident for his efforts.