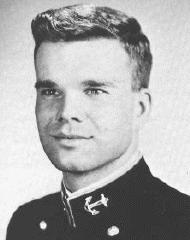 Mike attended Abraham Lincoln High School and then City College of San Francisco for two years as a Pre-Med student, before heading East. His record there includes membership in the local fraternity of Beta Phi Beta and the Student Council. Always an avid mechanic, he was a member of Drag Masters and customed his own '53 Mercury. Since Mike is always serious in any thing he undertakes, he is now well on his way to getting a major in Electronics. For extracurricular activites sailing on the schooner Freedom and company cross-country occupy most of his time. Because of his very sociable nature, especially with the girls, Mike is welcome at any party and always manages to have two or three girls with cars and motorboats on a string. His future prospects are to follow in his fathers footsteps and go into submarines. 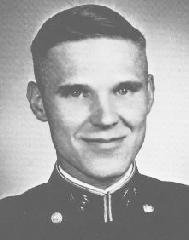 After one year tour of duty with the Naval Reserve Officer Training Corps at the University of Washington, John left the great Northwest to join the ranks of the Brigade of Midshipmen. His quiet, friendly, and hard-working attitude saw him through plebe year. Most of his spare time was spent at Hubbard Hall with the plebe and varsity 150 pound crew team. The academic departments gave John very little trouble and left him those few precisous moments to date or attend a party. Never known to date the same girl twice, he believed in "equality for all." John, with his drive and determination, will be a welcome addition to the ranks of the Navy. 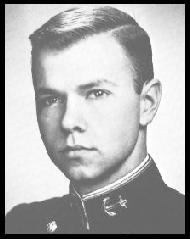 Ward came to the Academy from the swamplands of southern Louisiana after spending one glorious "fraternity-type" year at Georgia Tech in Atlanta, Georgia. Being acquainted with the type of life associated with a fraternity, Ward quickly adjusted to life at USNA finding plebe year not unlike his year as a "pledge." Upon his arrival here he continued to be active in the various club activities offered to him by the Academy as well as being an outstanding oarsman on the 150# crew team. His small frame, however, is greatly outweighed by his strong ambition and energetic character which made it natural for him to obtain the many friendships that he has. Possessing a cheerful attitude and amicable personality, Ward is sure to be a valuable asset to any command he joins.