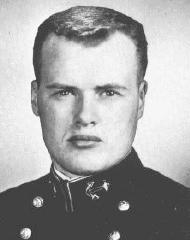 Never in need of a formal introduction, Bob's easy going and friendly ways served as his passport. Coming to USNA after a year at St. Norbert in Wisconsin, he made his mark not only in academics but his energies carried him far in the field of Brigade Activities. As a member of the Log and Splinter and Ring Dance commitee, it seemed as if the "financial wizard" was always collecting for something. His athletic prowess was devoted mostly to the support of his company and the infamous First Base Club. To those who were closely associated with Bob, he proved to be a constant source of humor and amazement. Outspoken and frank, he never let even the most insigfificant thing slip by without a comment. He will be a great asset to the Fleet and a valuable addition to anyone's list of friends. 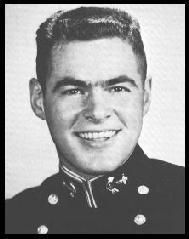 "Bip" was born in Opelousas, Louisian, on 2 September, 1940. While in high school "Bip" demonstrated his all around capabilities by lettering in football, basketball, track, and baseball, by being treasurer of his class during his junior and senior year, and by grduating as salutatorian of his class. After high school "Bip" attended the University of Southwestern Louisiana for a year before entering the Naval Academy. At the Academy everyone who came in contact with "Bip" can tell you that he didn't lose a bit of his interest in sports, as he was very active in the company intramural program. When engaged in the strict routine of life at the Academy, "Bip" showed his ability to use his time to its greatest advantage, and on liberty could always be counted on for showing the way to a good time for all. A bright future lies in store for "Bip", and we wish him the best in all he undertakes. 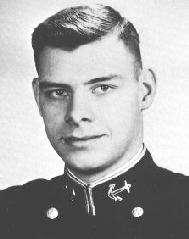 Al came to the Naval Academy from Hasbrouck Heights, New Jersey. Although he sometimes receives arguments, he is quick to defend the many merits of his state. Al has been an energetic participant in many sports throughout his four years. He banged heads with the best of them while out for plebe football and looks like he is part of the varsity in every battalion football game. He carries this same vigor into his company soccer games and squash matches. For Al's other side, one has only to drop by his room on a Sunday afternoon to find him producing a colorful scene with his paints. His painting talent became evident after he won the Triden Art Contest in 1961. With his active approach and his varied talents, the Navy will have a fine officer.