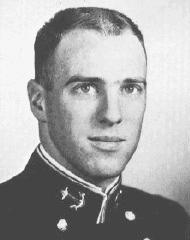 Bob, alias Robby Roadrunner, brought his winning personality and quick smile to the Brigade in lieu of accepting an appointment to the Coast Guard Academy. His lack of physical stature is inversely proportional to his enthusiasm for a good time or an extra hour's sleep. His participation in plebe soccer, company soccer, and lightweight football exemplified his outstanding competitive spirit. The plebes will remember Bob as a connoisseur of fine sandwiches and sundaes. These appetizing concoctions will be placed high on the tantalizing delights capable of preparation by the upperclass gourmets. Bob's plans after graduation include a career in "anything but the Marine Corps." His ability to cooperate and yet display the appropriate amount of leadership promises to make his a brilliant future.

Earl came to the Naval Academy from Menlo, Washington. A Navy junior of two generations, he decided young on a Navy career. While at the Academy he participated in plebe 150 pound football and plebe and varsity track. He also found time during his non-varsity seasons to help his company intramural teams. He enriched his professional knowledge in activities with the YP Squadron. Well liked by all who knew him, Earl will be as much a credit to the naval service as he was to the Brigade during his four years by the Severn. 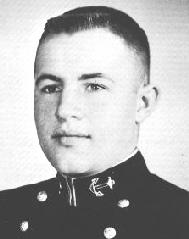 Richard William Buelow, known to his classmates and friends as Dick, hails from Independence, Iowa. Upon graduation from high school, he received a Congressional appointment to the Naval Academy and in July of the same year became a member of the Class of 1963. Dick is very proud of his home state and is quick to tell you as much any time the subject may arise. His interest in the "Hawkeye" sports teams is second only to those of the Navy. Since his arrival at the Academy he has participated in numerous intramural sports. He has been a member of his company's lightweight football and cross country teams and his battalion's lacrosse and swimming teams, just to mention a few. He has also been an active member of the Newman Club and the Reception Committee. Dick's friendly, easy-going personality has made him very popular here at the Academy and, coupled with his many other outstanding qualities, will assure him of a very successful future.