Jim has waged a personal cold war against the Executive Department, not always being the victor. His easygoing and amiable personality has made him a friend of all those who know him. Standing in the top 20 of his class in Physical Education, he has added greatly to the sports program here at the academy. During his first year alone, he was a member of the plebe swimming, tennis and 150lb. football teams. No slouch in academics, Jim has supplemented his courses with various overloads. Always the life of the party, he's often found with a brunette on one arm and a blonde on the other. Looking forward to joining the undersea fleet upon graduation, Jim will be as fine an officer as he was a midshipman. 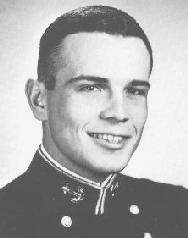 "Skip" hails from Bakersfield, California, and this fact is constantly revealed to friend and foe alike. Generally outspoken about California, he would rival even the proudest Texan's ability to expound on home-state attributes. Soon after entering the academy, Skip found his calling as a sailor. He has been a regular member of the Academy Ocean Sailing Squadron. Always a great one for stories and doodles, Skip has found merit in working for the Log as a writer and cartoonist. He also has been active in the Foreign Relations and Radio Clubs. A desire to master a foreign language has kept him busy as a member of the Italian Club. Skip has seriously considered all aspects of the Navy. Whatever his choice, the service will receive a fine gentleman. 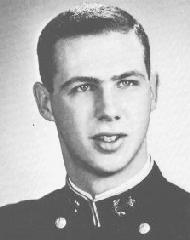 Mike is one of the finest midshipmen ever to come from our most highly populated state. He brought with him from Long Island the experience of being a football and track captain, and the ability to get along with everyone, which is evidenced by his easy going personality. His height and tremendous natural athletic ability were put to good use when he went undefeated in company cross country and as a key member on the Brigade Champion heavyweight football team. Besides the many sports at which he excelled, Mike also enjoyed playing chess and was a member of the Chess Club. His grades compare favorably with those of his classmates as does his taste in "The Spenders of Our Pennies". His pleasant personality and ability to organize mark hiim for a successful career, and he agrees fully with his firstie's philosophy that "Navy line is mighty fine."