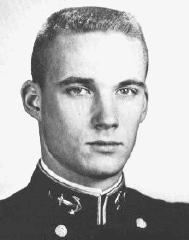 Phil helped to bring some of that renowned California sunshine to these grey walls on the Severn. Well-liked, he combines a warm smile with an outward personality which is hard to beat. Active both athletically and socially at Piedmont High School, Phil entered the University of California, where he commenced studies toward a medical degree. However, turning his sights toward Annapolis, Phill donned the uniform of a Naval officer in preference to that of a doctor. Such was the Navy's gain, for Phil distinguished himself as an outstanding member of his class. Scholastically, he did well at the Academy. In addition to being on the Superintendent's List, Phil took electives for a major in Math. A stalwart member of the company squash and battalion tennis teams, Phil kept active athletically. Whatever branch of the service he chooses, he will distinguish himself as a fine representative of the Naval Academy. 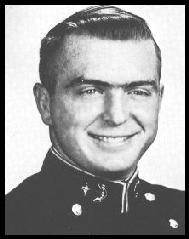 Rog hails from the "Land of Ten-thousand Lakes," Minnesota, and calls St. James his hometown. He came to USNA via the U. S. Air Force and the Naval Preparatory School at Bainbridge, Maryland. Rog spent his plebe and youngster years in the "Terrible Tenth Company," where he was a member of such outstanding groups as Father Flannigan's choir boys. Rog is a supporter of plebe year and a great help in keeping up the company spirit. When the going gets rough, he is always there with his sharp wit and good sense of humor. Rog has been an outstanding midshipman and is highly regarded and respected by all who know him. His untiring effots to help anyone will make him a great asset wherever he goes. 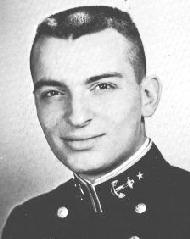 Fresh out of high school in Revere, Massachusetts, Ted soon became well-known to his classmates for his sincerity, friendly manner, and ready sense of humor. A perfectionist through and through, he firmly believes that anything worth doing is worth doing well. This attitude bas been evidenced in his efforts as Business Manager of the <I> Lucky Bag </I>, in the Catholic Choir, and his fine contribution to company sports. Ted's hard work has won him Superintendent's List honors, and when anyone had a little trouble with math or engineering, he was always ready to assist with a very capable hand. A man who has again and again proved his ability to manage any task presented to him, his spirit, enthusiasm, and leadership will be remembered by those fortunate enough to serve under him or with him.