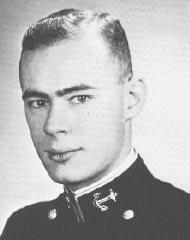 Tony left Naples, Italy, at the age of thirteen and made Roselle, N.J. his hometown; however, as is evident from his whimsical personality and flair for women and romance, Tony has not lost his Italian gusto and charm. Plebe year found Tony class company and honor representative, reporter for the "Trident," and member of the Italian Club. During his last three years, Tony spent all his spare time making the Italian Club better and better. Soccer is Tony's sport specialty and love, besides his OAO. With his athletic ability, goes a fervent dsire to study and learn, especially in the field of foreign languages. Tony has a taste for soft and semi-classical music, but has also taken a liking to singers such as Pat Boone and Johnny Mathis. With his zealous desire to work hard for what he believes worth-while, Tony's shipmates have no doubts that he'll be an asset to the fleet. 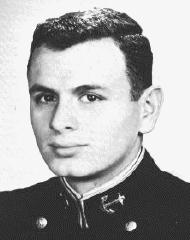 Mike hails from Oceana, Virginia, where he attended Princess Anne High School. He came to the Academy directly out of high school on a Presidential nomination. Mike has taken an active part in extracur- ricular activities at the Naval Academy, having been in the NA-Ten, Concert Band, Drum and Bugle Corps, and the Musical Club show. It is quite evident from these activities that he has an avid interest in music of all types. He has also shown his athletic versatility by participating in a number of the intramural sports offered at the Academy. Mike has a warm, straight forward attitude producing a personality that enables him to make friends easily. He has also proven to be very industrious by achieving good grades, even though much of his study time is taken by his extracurricular activities. Mike will make a fine officer in whichever phase of the service he chooses, and he will easily gain the support and loyalty of the men under him. 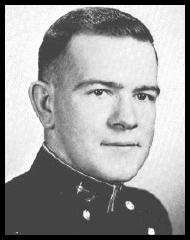 Duffy, as he is known to his many friends throughout the Brigade, came to the Naval Academy after spending a year as a physics major at the University of Minnesota. A great stereo and hi-fi enthusiast, Duffy could always be found endeavoring to help a friend on some intricate electronics problem. He had a quick humor and a love for talking that was unrivaled. Once started on a favorite topic, he could rarely be subdued. As a member of the Log staff and Brigade Activites Commitee, Duffy manifested his great interest in the spirity of the Brigade. He was strictly an intramural athlete, where his enthusiasm was directed toward the aquatic sprots. Duffy's classmates will always remember him as the friendly, easy-going person that he is, and during his career in the Fleet, Duffy will surely be an outstanding credit to the Naval Academy.