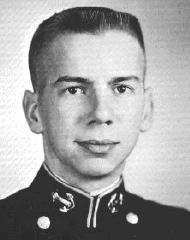 Larry Doll -- a good man to have around, especially sitting across from you during study hour. Straight from winning top scholastic honors in high school, Larry had very little trouble stepping into the fast moving Academy program. Being a good plebe, he didn't tell anyone that he had sprained his foot going to formation for the Little Army-Navy Football Game, and marched all the way to Navy-Marine Memorial Stadium with a broken ankle. He did complain though, when the took him to the hospital and he missed the second half. While he worked hard at everything he did, he didn't have to work at making friends. His easy manner and quick wit made him friend to all that knew him. His future plans are uncertain right now, but one thing certain is that Larry will find success no matter what he does.

Jack, a Connecticut Yankee, hailing from Milford, Connecticut, came to the Naval Academy from the Fleet via the Naval Academy Prep School. Being a professional all the way, Jack was a natural for the YP Squadron and devoted much of his time to its activities. During his non-sailing seasons, he participated in company intramurals or battalion track. Well-liked by his classmates and active in his company, Jack was still more at home on the bridge than ashore. He was happiest when he was on cruise or on a YP. This, along with his confidence and inspiring personality, is bound to guarantee him a successful career in the Navy. 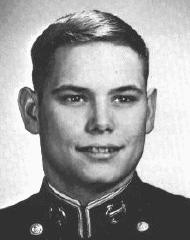 Dave came to USNA after completing a very successful high school career and a year at Sullivan Prep. He immediately proceeded to compile an enviable record here, especially in athletics. Track and swimming were his strong sports. He set the plebe record in the 100 yard dash, and helped set two relay records in swimming. Although Dave is a strong competitor, his personality and good nature have helped him win many life-long friends and become a respected leader in our class. Dave and academics never got along too well, but they never got the best of him. If and when he wanted, there was always female companionship. We are sure that the Navy line will be proud and fortunate to receive a man of Dave's qualifications.