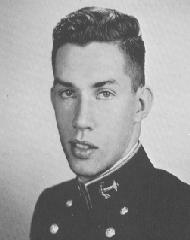 Bill, sometimes called "Death" by his company classmates and the upperclass of plebe year, hails from the town of McKeesport, Pennsylvania. The quiet manner which surrounds Bill's appearance sometimes fools a casual acquaintance. An avid member of the varsity debate team, Bill at any time welcomes a good sound argument. Bill's other interests include the German Club, Newman Club, and the company softball team. Among Bill's likes and dislikes concerning academics at the Academy, English seemed to rest upon the higher level and mathematics the lower. A quick mind, pleasant personality, and a smart appearance will benefit Bill in the Naval Service. 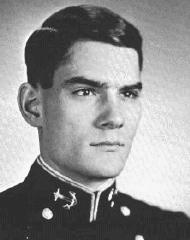 From the rigors of a military high school, Bill stepped directly into the Naval Academy to further pursue his desire for a service career. Quickly adjusting to his new life, he had also to adjust to a new nickname, "Snake," which was given to him after a colorful escapade. In his years on the Severn, Snake was a stalwart supporter of the intramural program, being a member of the Brigade championsip fencing and tennis teams, as well as a member of our undefeated plebe fencing team. His talents, however, were not limited to the playing fields, having been from time to time entitled to the priveleges accorded to members of the Superintendent's List. His classmates' respect for him was shown by his election to the Brigade Honor Committee second class year. As Snake follows his career in the service of his coutry, he'll always be rembered and known by not only his classmates, but also those with whom he serves, as an industrious worker and natural leader. 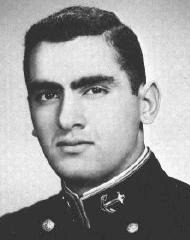 It was no surprise to his classmates that "Foss" has left his mark on Academy sports. Before coming to USNA, Joe left quite an impressive record in Brockton, Mass. Lacrosse and football are his major interests, but his academic record was even more envious. A frequent member of the Superintendent's List, Joe was a good man to have around during study hour. Joe is a hard worker who will do his best for whatever cause he is working for. Perhaps "Foss" will be remembered most for his class spirit. Joe always had his classmates in mind. Come June 1963 the Adademy will graduate a true gentleman -- Joe Fossella.