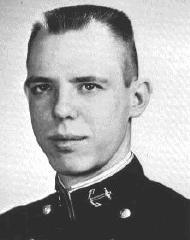 After being born and raised in Seattle, Washington, Gary spent a year at the University of Washington. The wanderlust bug having bitten him during this year, Gary could look no further west, and so he set his sights upon the other side of the country and found his way to USNA. His interests were many and varied. Equally at home on a rifle or pistol range, next to a chessboard, shooting pool, discussing relative merits and demerits of the Executive Department, philosophising about history, or even just quietly studying, he managed to keep quite busy during his four years at the Academy. His great interest in history and government has motivated him towards a career in Intelligence or Attache work. Gary's congenial nature and ready smile will contine to be an asset to him throughout his life. 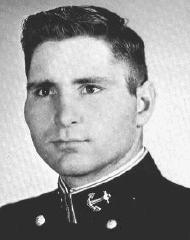 Contrary to Horace Greeley's advice, Chuck came East. A native of the City of Angels, Chuck spent two years at East Los Angeles College before getting into Uncle Sam's organization. Since arriving here Chuck's main interests have been Navy football, fine music and beautiful girls. The old adage about football heroes and beautiful girls is proving true for Chuck, having been a mainstay on the plebe and junior varsity teams. Chuck hasn't decided on his service selection yet, but whatever he chooses, they will receive a fine young man. 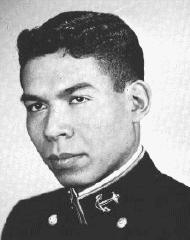 Ernie came to the banks of the Severn from the plains of Texas less than a month after his high school graduation, but academics never bothered him seriously. It was a very rare Superintendent's List without Ernie's name on it. Having great spirit and determination has made him an asset to every team he has ever been on and enabled him to get his parachute wings after youngster cruise. Not being tied down with one girl has let Ernie search far and wide for his dream, a combination of brains and beauty with a little athletic prowess. His determination and ability coupled with friendliness and a fine sense of humor are sure to make him welcome anywhere he chooses to settle.