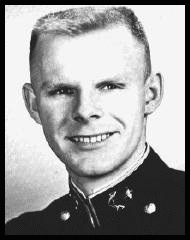 Hailing from the corn fields of Illinois, Don came to the academy after graduating from Rock Island High School. Quite a runner in his younger days, Don excelled in track and held his own on the basketball court. In the classroom he ranked at the top of his class, as well as being elected Vice-President of his class. Since coming to the academy, Don has continued to excel in the classroom especially in the fields of math and science. His interest in athletics, however, has been replaced by a new attraction, the female sex. Seldom seen without a pretty escort, Don will be well rememberded for his weekly trips into town. Always easy to get along with, Don made many friends while here at the academy and should continue to be a success in his future career as a Naval oficer. 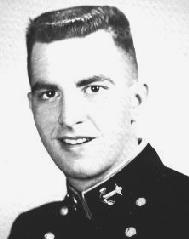 A product of the Bronx, New York, Bill arrived at Annapolis well qualified to accomplish the tasks of a midshipman. He attended Mt. St. Michael Academy. Varsity football and track tended to satisfy his athletic desires. He could always be found putting in a little extra time on his favored math and science courses. At typical New York youth, he tinkered with hot rods and spent plenty of time playing sandlot ball and visiting his favorite pizza joint. As a midshipman, Bill has always been a source of joy and honest fun. A constant source of laughs, he will be remembered for his boisterous scenes. His competitive spirit has been satisfied by chess and fieldball. We only wish the best for Bill in his future life and career as a Navy pilot.

"Hoot" hails from Miami, Oklahoma, where he attended Northeastern Oklahoma A&M Junior College for a year before coming to USNA. Between his many incantations over our beautiful but humid weather and our rapid pace both academically and athletically, "Hoot" continually shone above many of his compatriots. Having mastered the art of procrastination before entering the Academy, he continued along this vein, but only to a certain extent. When called upon or needed, he could always be depended upon not only for aid or assistance, but for an outstanding job. His slow and methodic nature produces a wild array of ideas and schemes. "Hoot" has been an outstanding intramural volleyball, basketball, and softball participant. With his slow, easy, yet razor-sharp manner, Hoot will surely be a successful officer in his military career.