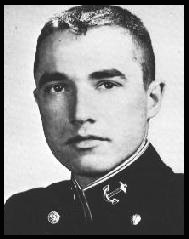 Howie embarked upon his naval career as a junior in high school, when he joined the Naval Air Reserve. After graduation from high school, he went on active duty and entered the U. S. Naval Academy Preparatory School which led to his entrance to the U. S. Naval Academy. Plebe year he participatedin cross-country, track, and lacrosse, and in youngster year in varsity cross-country and track. Having difficulty with the academics, he decided to limit his sporting activities to company and battalion sports. Dragging was also limited; however, he made up for it during the summer in the Bethesda area where he attained the title of "social director" and "let's have a party" were standard words in his vocabulary. Contact with the fairer sex consisted mainly of Navy nurses, who could always be counted on for a better than good time, especially during mid-term and spring leave periods. 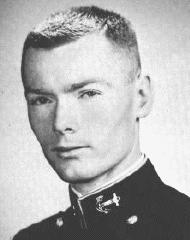 Fred got one of '63's lowest initial travel allowances for his short trek from B-more. Upon arrival, the P. E. department was stupefied by his crawl stroke although he did splash out the required 100 yards for knockabouts. In sports he ran company cross-country and battalion track. His chief interest is things mechanical and electrical so he joined the Juice Gang and helped to light the shows and make signs for Bancroft Hall. Along this line, Fred also belongs to the Automobile Engineering and Aeronautical Engineering Clubs. From the above "nuts and bolts" description he is one of the few midshipmen to enjoy an O & R tour. His red hair has helped make him easily recognizable, but he views this as a hindrance if you are trying to dodge the sleuths of the Executive Department. 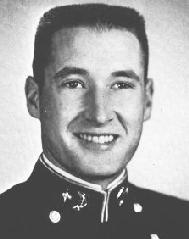 Tom left the hills of Missouri in June of 1958 on his path to the Navy. Launching his promising career in the Fleet, he spent a short year at Navy Prep. Following graduation he arrived here on the Severn. Plebe year posed no serious problems to Tom, and he stepped into the Brigade virtually unharmed. For youngster cruise Tom was assigned to the Saratoga, where he absorbed the necessary seamanship expected of a Midshipman. The academics of youngster year seemed to be designed for him, as he gained a place on the Superintendent's List. In extracurricular activities Tom found a variety of intramural sports to his liking. We shall all remember the added zest Tom provided to many company parties. Those of us in the company will always remember the good times and added wit which Tom provided. Whatever Tom goes into after graduation, we are sure that the Fleet will be much better for it.